We’re out until Thursday, December 26th, watching the early bowl games. See you then!

Our turkey covered with bacon, cooked on the grill again this year. Tradition tastes so good…

No heavy lifting for today (unless perhaps a really big present, maybe a new chainsaw or something). We’re at home this year for Christmas – but my 20-month old grandson Ezra will be visiting from California, and  he and Gramp will undoubtedly fire up the old chainsaw at least once. However, I’ll be back on Thursday, December 26th.

For now, I have an arboriculture law present for you from me.

I really do, a little literary gem, a simple case from That State Up North (Michigan, for you non-Ohioans out there) in which the property owner sued a driver who careered off the road and ran into the landowner’s beloved oak tree. The tree was badly damaged, the plaintiff said, and would need special care for the remainder of its days.

The driver defended on jurisdictional grounds, arguing that Michigan’s “no fault” insurance law meant that the court could not assess property damages against him for the mishap.

The Court denied the landowner’s case, but it did so in verse:

We thought that we would never see
A suit to compensate a tree.
A suit whose claim in tort is prest
Upon a mangled tree’s behest;
A tree whose battered trunk was prest
Against a Chevy’s crumpled crest;
A tree that faces each new day
With bark and limb in disarray;
A tree that may forever bear
A lasting need for tender care.
Flora lovers though we three,
We must uphold the court’s decree. 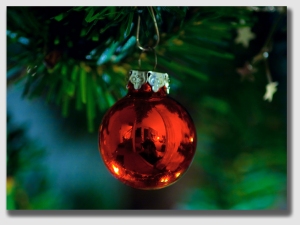 Doggerel? I don’t think so. Perhaps “poetic justice” instead. Whatever it might be, it makes for more interesting reading, and no doubt amused everyone except the plaintiff, who was left uncompensated for the damage to the oak tree.

May your trees remain healthy, happy, properly trimmed by a professional arborist, and clear of easements, rights-of-way, neighbors and passers-by for this season and all of 2019.

Merry Christmas to all!

“A wayward Chevy struck a tree,
Whose owner sued defendants three.
He sued car’s owner, driver too,
And insurer for what was due
For his oak tree that now may bear
A lasting need for tender care.
The Oakland County Circuit Court,
John N. O’Brien, J., set forth
The judgment that defendants sought
And quickly an appeal was brought.”

“Court of Appeals, J.H. Gillis, J.,
Gave thought and then had this to say:
(1) There is no liability
Since No-Fault grants immunity;
2) No jurisdiction can be found
Where process service is unsound;
And thus the judgment, as it’s termed,
Is due to be, and is,
Affirmed.”