Last Wednesday, we wrote about our 10-year old neighbor’s remarkable good fortune in finding a Wham-O Superball, and the law that governed whether he could keep it or had to return it to another claimant. All of that turned out to be moot, as he promptly lost it in a cornfield. But we had so much fun writing about finding lost property that we though we’d take up the obverse of that coin today – what happens when the lost property was stolen to begin with. 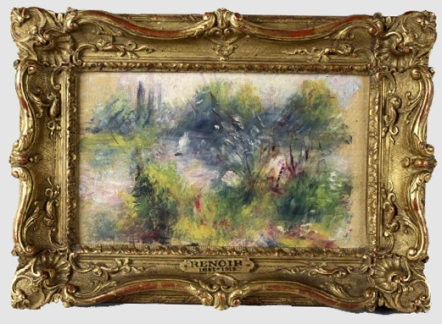 The objet d’art that started it all

Now, ripped from the headlines… and based on a true story… we present the tale of poor driving instructor Martha Fuqua, whose purported avocation of haunting flea markets and garage sales brought her a brief shining moment of wealth and fame.

Martha dropped $7.00 on a dusty and faded old painting in a dilapidated frame. Or so her story goes. She says it sat around her place for a few years before she decided to get it appraised at her late mother’s urging. Lo and behold, the painting turned out to be by the French impressionist Pierre Auguste Renoir. What a lucky break for Martha! And it seemed to be worth somewhere north of what Martha had paid for it, about 15,000 times her initial investment.

Everyone loves a story like this, an everyday Joe or Jane unexpectedly becoming rich because of serendipity. Like the German teen who just stubbed her toe on a 1-lb. gold bar while swimming on vacation. Martha’s story was equally compelling – maybe even more so, because she had just lost her teaching position and was training to be a casino blackjack dealer. No question, Martha sure could stand to be Queen for a Day, and maybe stub her toe on a windfall herself right about now.

But alas, nothing ruins a good story like an eyewitness. Or two.

When Martha sought to auction the piece of art in 2012, the word quickly spread that the piece was Renoir’s On the Shore of the Seine, a 5½ x 9-inch landscape. Martha, who began calling herself “Renoir Girl,” was basking in the publicity. Reporters and art enthusiasts tried without success to establish the provenance of the work, and someone eventually tracked it back to the Baltimore Museum of Art. Officials there denied ever having had it hanging on their walls. But shortly before the auction – which was expected to bring Martha over $100,000 – the Washington Post found documents showing that the May family, a prominent patron of the BMA, had loaned the work to the museum in 1937. Museum officials checked again, and this time found records showing the landscape had been reported stolen in 1951.

Enter Renoir Girl’s brother, Matt, who said that he had seen the painting among his late mother’s possessions several years before his sister said she had bought it for the price of a Subway foot-long and a medium drink. A mother who happened to have been an art student in Baltimore in the early 1950s, right when the diminutive painting was plucked from the wall of the museum. Other family acquaintances recalled seeing the painting at the Fuqua family’s home in Virginia in the 80s and 90s. Oh, those pesky eyewitnesses! 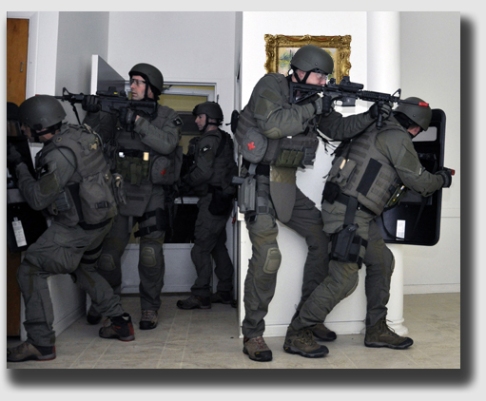 No impressionist paintings were harmed during this raid.

The BMA complained that it didn’t really care how Martha Fuqua came to possess the work, because regardless, it belonged to the museum. The FBI bravely swept in, shot an unarmed civilian or two, wrestled the painting to the floor, probably tased the frame once or twice, and took possession of the work. Then the courts took ove

The government filed what is known as an interpleader action in Federal court. An interpleader action states in essence that the filer is in possession of some property to which there are competing claims for ownership. It asks the Court to separate the wheat from the chaff, and sort out the claims. Ms. Fuqua said that she found the Renoir fair and square, and that anyway, she possessed it and possession is nine-tenths of the law. The BMA said that the law doesn’t let anyone, even an innocent purchaser, take title to stolen goods.

United States v. Baltimore Museum of Art, 991 F. Supp. 2d 740 (E.D.Va. 2014): Only two parties remained of the four claimants named by the plaintiff United States of America, Martha Fuqua – who claimed she bought the artwork at a flea market – and the Baltimore Museum of Art. The BMA claimed the Renoir landscape had been reported stolen from its walls 60 years before.

Surprisingly enough to people who follow this kind of thing, the Court actually observed that “the Fourth Circuit has endorsed the truism ‘[t]hat possession is nine-tenths of the law’.” Virginia common law presumes that the person in possession of a piece of property has a superior claim to it, although the presumption can be rebutted by sufficient evidence. The Court noted that one way of rebutting the presumption was by proving the property was stolen, because the law was clear that “even a good-faith purchaser for value cannot acquire title to stolen goods.” 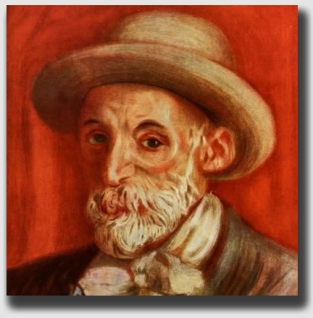 Interestingly enough, Pierre “Pete” Renoir, pictured here, was one of the few interested parties not to make a claim in the case for the landscape at issue.

BMA essentially was bringing a detinue action, a common law action to obtain an order from the court that its property be returned to it from another person – not necessarily a wrongdoer – who for whatever reason is in possession of it. In order to prevail, BMA had to prove (1) a property interest in the item; (2) the right to immediate possession; (3) that the property is capable of identification; (4) that the property is of some value; and (5) that it possessed the property at some time in the past.

The parties didn’t dispute that the property – a painting – could be identified and that it had considerable value. Ms. Fuqua, however, claimed that the museum couldn’t prove it had ever possessed the painting. The BMA produced copies of the 1951 police report, copies of its records showing that the painting had been loaned to it, and copies of board minutes from the early 1950s citing the theft and an insurance claim. (In case anyone wonders, the May family descendents had been named in the suit as potential claimants, but they waived any claim to the Renoir). 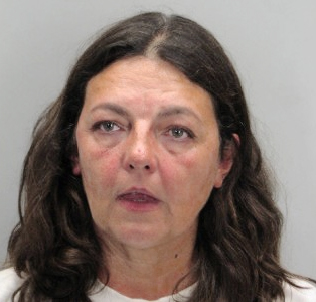 Martha Fuqua – the “Renoir Girl” herself – argued that possession was nine-tenths of the law. It’s that other 10% that’ll get you, however, as it did in this case …

Martha Fuqua argued that the BMA records weren’t reliable evidence, but the District Court found the internal records showing the painting was loaned to it, that it catalogued it and exhibited it in due course, were convincing. Even more persuasive was the official copy of the police report, proving that the BMA had reported the painting had been purloined. Ms. Fuqua complained that the police report was hearsay, but the Court correctly pointed out that the report wasn’t intended to prove that the painting had been stolen, but rather to prove that it had been reported stolen. Too fine a point for you? Such is the nature of the law of evidence.

The Court concluded that Ms. Fuqua hadn’t offered any evidence that the painting had not been stolen, and the BMA had provided plenty of proof that it had been. As a final “hail Mary,” the Renoir Girl speculated that maybe Saidie May ­– who had loaned the painting to the museum – hadn’t had her husband’s permission to do so. Like that mattered. The Court dismissed this canard as rank speculation.

The painting was ordered back to the museum. And by her reckoning, Martha Fuqua is out the price of a 6” pit-smoked brisket and Coke.

Martha later said she’d like to put all of the kerfluffle behind her. One can hardly blame her. As for Marcia “Light Fingers” Fouquet, Martha’s deceased mother, the Romans had a phrase for it: De mortuis nil nisi bonum dicendum est (“Of the dead nothing but good is to be said.”) So we won’t talk about her at all.