WHO YOU GONNA CALL?

So who you gonna call?

It’s not easy to defeat a utility company holding an easement for transmission lines, despite the facts that the power outage that spawned the Energy Policy Act of 2005 and turbocharged the North American Electric Reliability Corporation happened 16 years ago. The great Blackout of August 2003, after all, started primarily when power lines sagged into trees in the Cleveland, Ohio, area.

Yeah, it’s tough to beat the power company and its chainsaw-wielding minions … but the Corrigans did it for awhile. They had granted an easement to a Cleveland electric utility for a transmission line. In the wake of the blackout, the utility told the Corrigans (and thousands of others) that it would vigorously pursue cleaning up vegetation in the easements. This mean, among other things, no trees within 25 feet of the lines.

The Corrigans had a big silver maple that was about 22.5 feet from the lines. They loved that tree, so they hired an arborist at considerable expense to trim it away from the lines and to inject the tree with a hormone to slow growth. Tough luck, the utility said, it’s coming down anyway.

So who do you call when the power company shows up with chainsaws and a gleam in its institutional eye? The Corrigans raced to the local common pleas court, and asked for an injunction. The trial judge agreed, and the Court of Appeals concurred. Both of those courts sided with the Corrigans that the utility could only cut trees that were “a possible threat to the transmission lines.”

It seemed important to the Court of Appeals that the community had not experienced any service interruptions since the Corrigans had pruned the tree, although that reasoning’s pretty thin. The tree has to only fall once, cascading one failed transmission lines into a continental disaster. But the Court seems to have been favorably impressed by the amount of money the Corrigans had spent getting the tree professionally trimmed. 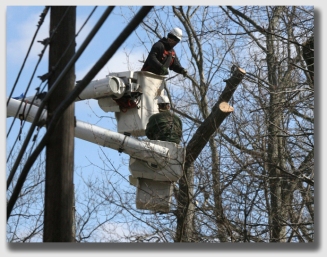 The utility saw an issue here that was bigger than just the Corrigans and their lone silver maple tree. It framed the question as being just who was in charge here, the 88-odd common pleas courts spread throughout Ohio or the public utilities commission. The Ohio Supreme Court agreed that this was indeed the issue, and ruled that the inclusiveness of the state statute and regulations delegating power to the Public Utilities Commission of Ohio gave PUCO the sole authority to decide questions of vegetation management. (Ohioans spell out the acronym “P-U-C-O”: please don’t try to pronounce it as a though it were a word).

We have to admit that the appellate decision had left us with the uneasy feeling that the Court of Appeals’ attempt to do some rump justice here may have made it much more difficult for a utility to exercise its easement rights. To be sure, a utility being sued in a case like this would have to be prepared with an expensive and eye-popping case that graphically depicts the dangers that a tree in the transmission path — even a well cared-for tree — can pose.

The Ohio Supreme Court’s holding provides electric utilities a much friendlier forum in which they must litigate issues of vegetation management, although that may not be a bad thing. Utilities have to walk a fine line, incurring ire if property owners think trees were pruned too aggressively, and facing universal fury (not to mention catastrophe) when service is interrupted by vegetation coming into contact with transmission and distribution lines.

The trial court granted an injunction barring the Illuminating Company from removing the tree, and the Court of Appeals agreed. The electric utility, seeing the issue as one that transcended the issue of one tree, but rather affected the company’s ability to manage vegetation in its rights-of-way throughout the state.

Held: The Corrigans argued that the issue was purely a contract matter, but the Supreme Court disagreed. Noting that “[t]here is no question that the company has a valid easement and that the tree is within the easement” and the easement’s language was unambiguous that the utility had the right to remove trees that might interfere with its transmission lines, the Court said the issue was the correctness of “the company’s decision to remove the tree instead of pruning it.” That was “really an attack on the company’s vegetation-management plan [and] that type of complaint is a service-related issue[] which is within PUCO’s exclusive jurisdiction.”

The statute creating PUCO to administer and enforce these provisions provides that the commission hears complaints filed against public utilities alleging that “any regulation, measurement, or practice affecting or relating to any service furnished by the public utility, or in connection with such service, is, or will be, in any respect unreasonable, unjust, insufficient, unjustly discriminatory, or unjustly preferential.” This jurisdiction is “so complete, comprehensive and adequate as to warrant the conclusion that it is likewise exclusive.”

The Court used a two-part test to reach its determination. First, it asked whether the commission’s administrative expertise was required to resolve the issue in dispute, and, second, whether the act complained of constituted a practice normally authorized by the utility.

The Ohio Administrative Code chapter on electric service and safety standards requires that utility companies establish a right-of-way vegetation-control program to maintain safe and reliable service. The Code requires that each electric utility inspect its electric-transmission facilities (circuits and equipment) at least once every year, in accordance with written programs, and takes a number of factors into consideration such as arcing, sagging, and line voltage as well as regulatory requirements from OSHA, FAA, and the Army Corps of Engineers. In addition, electric utilities are required to comply with the American National Standard Institute’s National Electrical Safety Code. The utilities are required to submit their programs to the Commission, which will resolve any disputes as to the efficacy of the plan.

The Court concluded that the Ohio Administrative made it clear that PUCO’s administrative expertise is required to resolve the issue of whether removal of a tree is reasonable.

The second part of the test determined whether the act complained of constitutes a practice normally authorized by the utility. Again, the Court said, the Administrative Code made it clear that vegetation management is necessary to maintain safe and reliable electrical service. Thus, the Supreme Court ruled, the second part of the test was satisfied, and the Corrigan’s complaint fell within the exclusive jurisdiction of PUCO.

That meant that the Illuminating Company’s decision that the silver maple interfered or threatened to interfere with its transmission line was a service-related question, and one that the Corrigans could only dispute in front of PUCO. The Court of Appeals judgment was thrown out.