DESPITE THE SPITE, IT’S THE WRONG HEIGHT 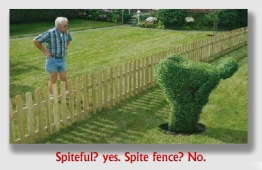 Over the next few days, we’re going to talk about “spite fences,” structures one neighbor erects because he or she does not like the other neighbor. Often creative, always ugly, spite fences are traditionally not prohibited by common law (the court-made rules of conduct that have evolved over the centuries), For that reason, just about all states have statutes that address the problem.

The law in the 49 common-law states (sorry, Louisiana, not you) disfavors statutes that are contrary to common law. Anyone who has ever watched a state legislature in action may understand the origin of this common-sense presumption. Flowing from the presumption is the general rule that when a statute is contrary to common law, it must be interpreted strictly and literally.

In today’s case, one neighbor accuses another of anti-Semitism, general nastiness, and such animus that the neighbors have teamed up with the homeowners’ association to run the plaintiff neighbor out of town. No one knows whether the plaintiff neighbor’s allegations are correct: in fact if six decades has taught me anything, it has taught me to look very skeptically on such broad-brush allegations. Usually, the more outrageous the alleged conduct, the less credible the allegation.

At this point in the lawsuit, the Court assumes that the plaintiffs’ allegations are entirely correct and provable. It asks, in deciding the defendants’ motions to dismiss, whether the complaints, if true, state a claim that would justify granting the plaintiffs the relief they seek.

Here, most of the plaintiffs’ complaints didn’t hold water. We’re going to focus on only one of those beefs, the count on spite fences. 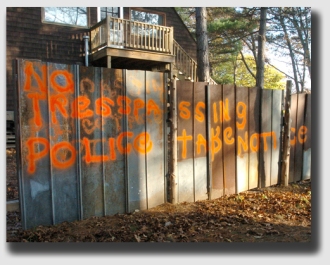 The Smalls’ overarching complaint was that Trudy and Brad embarked on a campaign to force the Smalls out because the Johnsons thought (1) the Smalls were Jewish; and (2) the Smalls were renters, not owners. It must be a doozy of a complaint, alleging as it does all manner of slights, humiliations and vigilantism, all intended to run the Smalls out of the development. But the count we’re focusing on today is the allegation that the Johnsons erected a “spite fence.”

The Smalls sued the Johnsons and the Homeowners Association in federal court, alleging violation of a number of federal claims. In such a case, under what is known as “pendant jurisdiction,” a federal court may also hear state claims arising from the same facts. One such state claim brought by the Smalls was that in May 2016, Trudy accused Art “of begin a racist, of engaging in Fair Housing Act violations, and repeatedly called him an extremely offensive anti-Semitic slur” – specifically, “Jew Face” – in front of his friends and potential clients. A few days later, the Smalls alleged, the Johnsons installed a “large wooden wall” which obstructs the Smalls’ view and interferes with their enjoyment of their property. The Smalls claimed the Homeowners Association approved the wall despite the fact that it did not comply with Association and Hamilton County restrictions.

The Johnsons and Homeowners Association both moved to dismiss the count.

Held: The claim that the Johnsons’ built a “spite fence” was dismissed. 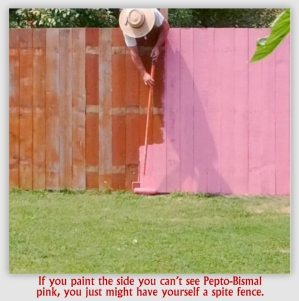 Under Indiana Code 32-26-10-1 – the state’s “spite fence” provision – a “structure in the nature of a fence unnecessarily exceeding six (6) feet in height, maliciously: (1) erected; or (2) maintained; for the purpose of annoying the owners or occupants of adjoining property, is considered a nuisance.” An owner or occupant who is injured in their comfort or enjoyment of their property that adjoins such nuisance may bring an action for: “(1) damages in compensation for the nuisance; (2) the abatement of the nuisance; and (3) all other remedies for the prevention of a nuisance.” Indiana Code 32-26-10-2.

Common law recognizes no such right, and thus, the statute, which is “in derogation of the common law… [must] be strictly construed.” If the fence in question does not meet the strict requirements of the statute, the Court held, it is merely subject to the common law of nuisance, under which a fence is only a nuisance if it encroaches on the adjoining landowner’s property. 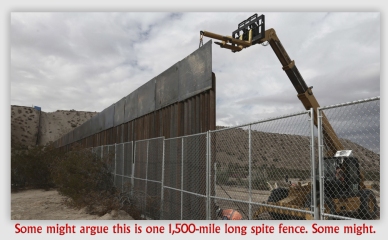 The necessary elements of a claim under the spite fence statute are that: 1) the fence must exceed six feet, 2) the excessive height must be unnecessary, and 3) the fence must have been maliciously erected to annoy adjoining property owners or occupants. No matter how malicious or excessive a fence is, the Court said, it does not violate the statute if it is six feet or less in height. On the other hand, a maliciously erected fence that is more than six feet tall is not cured by a local permit because the state law trumps municipal ordinances and regulations.

Here, the Court ruled, the Smalls’ complaint is facially deficient because it fails to allege the wall exceeds six feet. In fact, the complaint does not include any height allegation, only that the wall comes to roughly 13 feet from the Smalls’ front porch.

“Thus,” the Court held, “the allegations fail to meet the statutory height requirement or the encroachment requirement of common law nuisance. For this reason, [the Smalls’] claim is dismissed.”