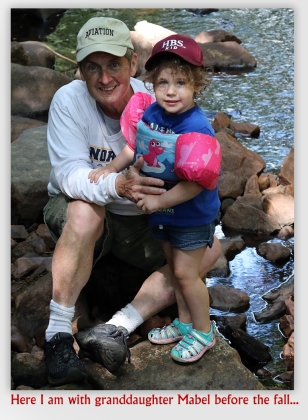 I’m in the middle of a mountain vacation this week. Today, I fell in a hole between two rocks while negotiating a trail that followed a mountain stream. I was carrying my granddaughter at the time, but I set her down safely as I fell. Besides a barked shin, I was unhurt (just embarrassed).

We got to the trail by boat, and on the way back, I hit a submerged rock with the outboard motor. Afterwards, I bumped my head on a floating swimming dock as I swam toward it doing a backstroke.

The hole between the rocks was so open and obvious that the Dept. of Environmental Conservation could not reasonably anticipate that anyone would step into it while carrying a 3-year old granddaughter. The submerged rock was out near the middle of the lake, and was unmarked and in what appeared to be deep water. The swim raft? Well, you couldn’t miss it.

Let’s say I had followed the trail but, just before the rock, come to two construction barrels with that bright-orange plastic netting construction crews us stretched between them. And, being kind of obtuse, I stepped over the netting (still carrying my granddaughter) and tripped on it, falling. It is fairly open and obvious that the netting was open and obvious, and I had gotten my just desserts trying to cross it.

Ah, but that did not deter Julie Coburn. When she and her husband set off along a trail in the Kays Creek Parkway that was festooned with signs warning that the trail was closed, they thought, “Nah, it can’t mean it’s closed to us.” Later, when they happened upon two orange construction barrels with netting stretched between them, they remained clueless. Julie stepped over the netting, snagged her foot in the plastic, and fell.

Normally, someone pulling such a boneheaded stunt would slink away to the urgent-care facility, chastened and injured and (I hope) a little bit wiser. But this is America, people! We don’t do that here. And Julie didn’t, either. Instead, she sued the construction company for placing the netting across the closed trail.

Coburn v. Whitaker Construction Co., 2019 UT 24, 2019 Utah LEXIS 83, 2019 WL 2520287 (Supreme Ct. Utah, June 18, 2019): Whitaker was hired to install a water pipeline in the Kays Creek Parkway, a recreational area in Layton, Utah. The Kays Creek Parkway contains a number of walking trails that are designated for public use, one of which led to the pipeline construction site. Whitaker placed a “Trail Closed Ahead” sign at the trailhead indicating that portions of the trail were closed for construction and strung orange netting across the trail to deter people from walking to the construction site. Despite the warning sign and the orange netting, people consistently ignored the sign and would take down the orange netting.

In the summer of 2018, Julie Coburn and her husband went for a hike at Kays Creek Despite seeing the “Trail Closed Ahead” sign at the trailhead, the Coburns assumed the trail was open and continued on. A short distance into the trail, they encountered two barrels on either side of the trail with orange netting strung between them, with the netting fallen down and lying across the trail. Julie admitted the orange netting was a hazard but stepped over it anyway. She tripped and fell, hurting her arm and shoulder.

Julie sued Whitaker seeking damages for her injuries. Whitaker argued it did not owe Julie a duty of care under the “open and obvious danger rule” found in the Restatement (Second) of Torts — which Utah has adopted.

The district court and court of appeals agreed with the construction company.

Held: The Supreme Court held that the “open and obvious danger” rule kept Julie from recovering a dime.

This is so because defendants may reasonably expect the public, in the course of the entry and use to which they are entitled, to proceed to encounter some known or obvious dangers which are not unduly extreme, rather than to forego the right. However, even these defendants may reasonably assume that members of the public will not be harmed by known or obvious dangers which are not extreme, and which any reasonable person exercising ordinary attention, perception, and intelligence could be expected to avoid. And this is true particularly when a reasonable alternative way is open to the visitor, known or obvious to him, and safe.

Still, public landowners and possessors may reasonably assume that members of the public will not be harmed by known or obvious dangers which are not extreme, and which any reasonable person exercising ordinary attention, perception, and intelligence could be expected to avoid, especially when a reasonable alternative way is open to the visitor, known or obvious to him or her, and safe.

Here, Julie chose to ignore a “trail closed” sign and the orange construction netting barrier. What’s more, she recognized that one could easily fall crossing the netting, but did so anyway. The “open and obvious danger” rule easily applied, and saved Whitaker from any liability.