Harvey Weinstein, the late Jeffrey Epstein, White Nationalists, Antifa, Kim Jong Eun … we’ve had a belly full of people behaving badly in the past few years. Like we need this, here are a few more:

Welcome to the neighborhood …

Meet the Cooleys, neighbors who were so bad as to drive the Court to write a plaintive plea that everyone try to get along. How bad, you ask? Well, Mrs. Cooley tried to run down her neighbor with her car. She built a chicken-wire spite fence. Her son threatened to beat up his elderly neighbor (who had just had a heart transplant). Yes, that bad …

This case is one of those rare fact-driven trial court decisions worth reading just to get the flavor of the Court’s incredulity that people could carry on like this. At one point, the judge observes that “[o]ne could almost use that well worn lawyer’s expression ‘I rest my case’ after merely viewing Mrs. Cooley’s Exhibit 12, which in gruesome detail sets out the ‘this is my property’ syndrome.” The court finally issues a 15-point injunction ordering the Cooleys to stop doing 12 acts of malice, and the Quarantas to refrain from three others. It found application for a seldom-used Connecticut statute prohibiting structures built out of malice, banning a chicken-wire monstrosity erected by the Cooleys as a “spite fence.” Finally, it found the often-alleged but seldom-proven “intentional infliction of emotional distress” tort to have been shown here, and ordered the Cooleys pay the Quarantas legal fees.

At the end of its opinion, the Court ordered each party to read his final words out loud. Those were a plea by the Court for these people to rewind the clock to the beginning and try to get along. The Court’s frustration and sense that no matter what the law said, nothing would stop the bickering, comes through. Not great moments in the development of the law … just a neighbor law tale worth reading.

There was even a “spite fence” in the story …

Quaranta v. Cooley, 2007 Conn. Super. LEXIS 3199, 2007 WL 4577942 (Conn.Super. 2007). People behaving very badly. You know how the opinion’s going to go when the Court begins by quoting an old Supreme Court opinion that “… it is the bickerings, spite, and hatred arising from neighborhood quarrels; it is difficult for any legislation to remedy such evil.”

The Quarantas were senior citizens who had lived in the same home for 26 years. Mr. Quaranta was on life support system and eventually had a heart transplant. The Cooleys were younger than the Quarantas, but had a 25-year-old son and health considerations of their own. When the original landowner subdivided his property into the lots which became the homes of the Cooleys and Quarantas, there was an existing paved driveway to the Quarantas’ home from the street, bordered with a split rail fence and a grassy area on each side. The landowner created by deed two 25’ easement roads (for a total width of 50 feet) over the same area on which his driveway existed. Each lot owned 25’ of the road, and each owner had the right to pass over the 25 feet owned by the other. The practical effect of these easements is to allow all three parcels of land to share access to the public street with one common driveway. Although the neighbors couldn’t see each others’ homes, they ended up in a continuing vitriolic spat in which each side accused the other of using the “F” word, raising the middle finger on numerous occasions, and other immature and harassing behavior, such as the noisy racing of vehicles, the blowing of car horns and trash placement fights. 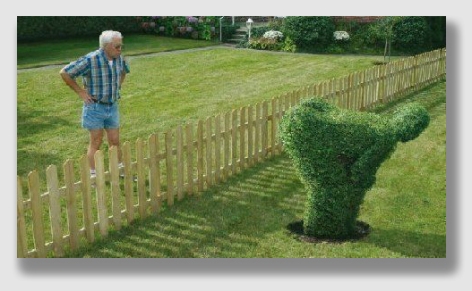 The Court held that the Cooleys, who were New York City dwellers unused to the suburban life, utterly lacked credibility on the stand. It found that the battle began with Mrs. Cooley delivering a letter to the Quarantas within 30 days of her having moved in, in which she told them their lampposts and driveway sat on the Cooley property. Then, the Cooley son began throwing keg parties at the Cooley home, with noisy partygoers parking all along the right-of-way. The parties were noisy and annoying, and afterwards, the Quarantas found themselves cleaning up empty bottles and cigarette butts. The parties were held about four times a month. The Quarantas complained without effect. The grand finale was the Cooley Halloween Party in 2005. When Mrs. Quaranta went out in her nightgown to ask for peace and quiet, the partygoers cursed her – one exposing himself to her – and urinated toward her. After this, Mrs. Cooley and her daughter, took to riding at high speed over the grassy area, even leaving deep tire tracks. Although the Cooley’s trash pickup was on Friday, they would put their trash out all week long, at a spot where it was viewable only from the Quarantas property. Animals got to the trash during the week and the plaintiffs did the clean up. Mrs. Cooley would to drive fast down the mutual passage raising dust and her middle finger while blowing her horn the entire distance. She overdosed her own lawn with weedkiller, killing all of the grass ostensibly so she wouldn’t have to mow. Her lawn, of course, fronted on the Quarantas’ lush and meticulous.

There were countless verbal confrontations as well. The Cooley son yelled at Mr. Quaranta, a man past 65 with a heart transplant, “Hit me! I’ll wipe the ground up with you.” Previously, another judge had ordered the parties to refrain from intimidating, threatening, harassing, stalking, assaulting, or attacking each other, and to refrain from entering the property of the other, until the dispute was tried and resolved on the merits. After that, the Cooleys built an ugly chicken wire fence on the side of the passage that fronts the Quarantas’ house only. The trial court was called upon to mediate the dispute.

Held: The Court found for the plaintiffs, the Quarantas. It held that Mrs. Cooley’s testimony was so bad that it noted that “[o]ne could almost use that well worn lawyer’s expression ‘I rest my case’ after merely viewing Mrs. Cooley’s Exhibit 12, which in gruesome detail sets out the “this is my property” syndrome. The court found it unsurprising that she took an axe to, and threatened to destroy, anything – even things of beauty – found on her property. These items included a lamppost, (that provided her light with the Quarantas paying for the electricity), fences (that enhanced the entrance to both their properties), a beautiful birch tree (with no professional evidence that it had to be cut down), a ceramic nameplate, (which her son admitted smashing) and even shrubbery. “Such warmth!” the Court said. “And it shows in the fifty plus exhibits.”

The Court held that the chicken wire fence was maliciously erected, based on its character, its location, and the obvious state of mind and motive of the defendant. It ordered the fence removal pursuant to §52-480 of the Connecticut Statutes. It found that the Cooleys had exceeded the use of the right of way in a vindictive and malicious manner so as to harm the Quarantas, rather than just for ingress and egress. It held that number of the Cooleys’ activities on this simple right-of-way were, “in layman’s terms, ludicrous, and in legal terms harmful, unnecessary, illegal and unreasonable.” It issued a detailed injunction spelling out 12 acts in which the Cooleys were not to engage, and 3 acts in which the Quarantas were not to engage. 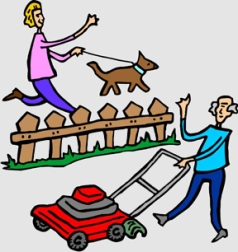 A happy ending? Not with these folks …

Based upon the totality of the evidence, the Court held that the Cooleys directly and indirectly negligently and intentionally caused severe emotional distress to the Quarantas, and knew or should have known that their acts would result in severe emotional distress to the plaintiffs. In the case of Mr. Quaranta, the distress was found to be life threatening. The Cooleys evidenced a reckless indifference to the Quarantas’ rights and showed an intentional and wanton violation of these rights. The injury was inflicted maliciously, with evil motive and violence. The Court awarded the Quarantas their legal fees as damages.

The Court took the unusual step of ordering a final statement to be personally read by the parties. It begged both parties to “go back to the day the Cooleys moved in and put everything back the way it was. Let us dig a hole and bury all of the ill feelings and hatreds that are all consuming.” The Court, writing this on Thanksgiving Eve, ended by noting that “[t]he person whom many people honor in this Holiday Season forgave everyone. Isn’t it time that the Quarantas and the Cooleys caught the spirit of the Season?”

Postscript: They did not. Rather, they were back in court repeatedly between 2007 and 2013, arguing over contempt motions filed against each other. Oh, the humanity …