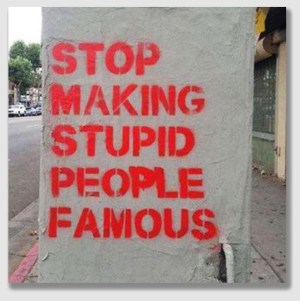 Oh, if it were only that easy …

In the world of negligence, it’s not enough that the person who screws up – referred to generally as the “actor” – is stupid. After all, the world is chock-a-block with stupidity, and if being an imbecile were enough to make one liable, we’d all walk through life with our checkbooks perpetually open.

No, idiocy is not enough to create liability. Instead, the stupidity must be the “proximate cause” of the damage suffered by the plaintiff. For all of you proponents of chaos theory, you can consider it the obverse of the “Beijing Butterfly Effect.” You remember the illustration: the beat of a butterfly’s wings in Beijing today sets a miniscule air current in motion, which sets other air in motion, and so on nearly ad infinitum, until the air currents set into circulation cause a thunderstorm a week later in New York City. Small changes in input result in big changes in output. Just ask Edward Lorenz.

Lorenz was a scientist, not a lawyer. Had he been an attorney, he might have sued the butterfly because he got wet hailing a taxi at 52nd and 5th Avenue. But the law wouldn’t have been with him, because his damages – a soaking-wet bespoke wool coat and trousers – were not proximately caused by the butterfly’s erratic flight around the Forbidden City seven days prior. It’s the lesson every first-year law student learns in Palsgraf v. Long Island Railroad, a now-legendary tort case from pre-Depression New York. 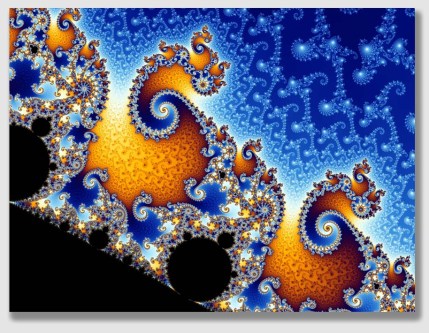 Chaos isn’t such a bad thing … the theory gave us Benoit Mandelbrot’s beautiful and repeating fractals.

The facts were almost Rube Goldbergian. Mrs. Palsgraf – the countess of causation herself – had just arrived at the station to catch a commuter train. A passenger carrying a package, while hurrying to board a moving train, appeared to two Long Island Railroad employees to be falling. The employee standing on the passenger car tried to pull the passenger into the car while the other employee tried to push the rider into the car from behind. Their efforts to aid the passenger caused the unlucky fellow to drop the package he was holding. The box – about 15 inches long and wrapped in newspapers – struck the rails in between the cars.

The package contained fireworks, and it of course exploded when it hit the rails. The shock from the blast caused a panicked bystander to stumble into a pair of scales, which fell over, striking Helen Palsgraf. Palsgraf sued the Long Island Railroad (of course, because no one else in the chain of causation had any money), claiming her injury resulted from negligent acts of the Railroad’s employee in pushing the passenger onto the train. The trial court and the intermediate appeals court agreed with Mrs. Palsgraf.

The Long Island Railroad appealed the judgment to the Court of Appeals, New York’s highest court. In a celebrated opinion by then-Chief Judge Benjamin Cardozo, the Court held that there was no way the LIRR employee could have known that the newspaper-wrapped parcel was dangerous, and that pushing the passenger would thereby cause an explosion. Without a reasonable perception that one’s actions could harm someone, there could be no duty towards that person, and therefore no negligence for which to impose liability. Whether the Railroad employees had acted negligently to the passenger they manhandled was irrelevant for Palsgraf’s claim, because the only negligence that a person can sue for is a wrongful act that violates his or her own rights. “If the harm was not willful, [a plaintiff] must show that the act as to him had possibilities of danger so many and apparent as to entitle him to be protected against the doing of it though the harm was unintended.” 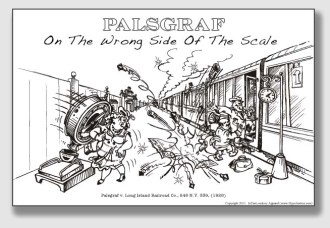 This is known as “foreseeability,” a concept that tends to limit liability to the consequences of an act that could reasonably be foreseen rather than to every single consequence that follows. Otherwise, liability could be unlimited in scope, as causes never truly cease having effects far removed in time and space. (This returns us to the wayward Beijing butterfly). Today’s case is a current illustration of what happens when a plaintiff’s lawyer slept through that particular session of tort law class.

So who was at fault? Ms. Hansen naturally blamed the condo association and Waste Management, for permitting a hole to remain in the lid (perhaps because both of the defendants had insurance). Being students of Palsgraf, the appellate panel made short work of this one, asking how the defendants could reasonably have foreseen that failing to seal a tennis ball-sized hole in the dumpster lid could cause a condo owner to fall down. They could not, of course. Ms. Hansen was out of court.

The squirrel is still on the loose.

Hansen v. Getchell, 70 Mass.App.Ct. 1101, 872 N.E.2d 840 (2007). Sandra Hansen had been a resident of the Beal’s Cove Village condominiums for nearly 10 years. She fell after being startled by a squirrel that leapt from a garbage dumpster she had opened to deposit some trash.

Hansen has owned a condominium unit at Beal’s Cove since 1997. During her years there, Hansen had actually seen animals such as raccoons and squirrels on the property, which is close to some woods. She also had seen animals at Beal’s Cove near a different dumpster as well. However, this being America, someone had to be at fault, so she sued Getchell, trustee of the Beal’s Cove Village Condominium Trust, and Waste Management, Inc., the waste removal contractor. 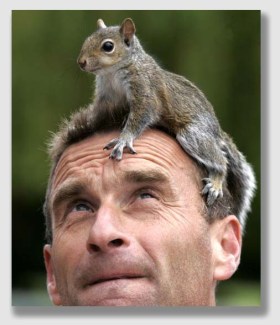 Squirrels can be frightening creatures. Just look at the terror on this victim’s face.

Hansen claimed that the dumpster had a hole in the lid the size of a tennis ball, a squirrel-size hole which had been there for weeks and which provided squirrels an unfettered means of access. Her expert opined that the failure to repair the hole in the lid was a substantial contributing cause of her injuries, and she blamed defendants for not fixing it. The trial court granted summary judgment to the defendants because Hansen failed to establish that the defendants owed her a duty, and she failed to demonstrate a causal relationship between the claimed negligence and her resulting injury.

Although there was evidence that the parties were aware that animals frequented the dumpster, the Court held that squirrels and other animals were a naturally occurring condition that the defendants didn’t create. There was no proof that squirrels or other animals that got in the dumpster made a habit of leaping out at unknowing depositors of trash. And even if – given the pesky and mischievous nature of squirrels – the defendants could have foreseen that they would leap from the dumpster, it wasn’t foreseeable that the leap would lead to a condominium tenant becoming injured.

In other words, it was not reasonably foreseeable that, as a direct result of the unrepaired hole in the lid, a person accessing the dumpster would be startled, fall, and become injured. Neither Getchell nor Waste Management, Inc., had a duty to guard against such an unforeseeable harm.