A TREE JUMPED OUT

Watch out for the tree, Mr. Miller …

It was a dark and stormy night when Mr. and Mrs. Miller drove through a mall parking lot, well after the lights were turned out. Mr. Miller missed a sharp turn in the drive, and hit an 8″ wide tree. He and his wife were injured, and while it went unreported, the tree probably didn’t fare that well, either.

Trees seldom sue, but the same can’t be said for the Millers. They went after the mall for negligence. To be sure, the tree showed evidence of having been hit before. The mall, however, argued that Mr. Miller was an idiot for driving too fast on a strange, unlit roadway in bad weather. It said he was contributorily negligent in the accident.

Back when this case was decided, we were driving a pretty sharp four-on-the-floor ’67 Cougar and filling its tank for 25.9¢ a gallon. Ah, those were the days… unless you were a litigant suing for negligence. At the time, contributory negligence was still the law of the land in most states. It was a Draconian doctrine: if the victim was negligent even a teeny bit, then he or she couldn’t recover a dime from the defendant, no matter how bad the defendant’s negligence by comparison. Since that time, contributor negligence has been replaced by “comparative negligence” most places. Comparative negligence is a percentage game: the jury finds that the defendant was, say, 70% negligent and the plaintiff was 30% negligent. The jury award of, say, $100,000 to the plaintiff would then be reduced by 30%, netting out 70 grand for our afflicted party.

Because contributory negligence was so harsh, courts often worked to find a way around its effect. In today’s case, the Court ruled that although Mr. Miller might have been contributorily negligent, that couldn’t keep the passenger, Mrs. Miller, from winning damages from the mall. The mall argued that Mr. Miller should share its liability to Mrs. Miller, but the state had an automobile guest statute that immunized a driver from liability to his or her passengers for simple negligence. 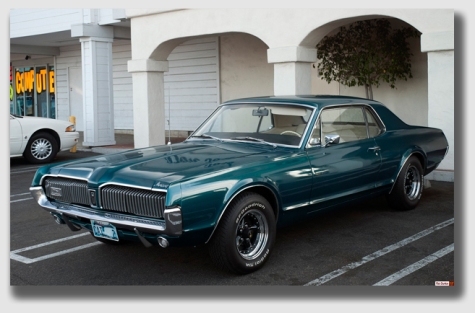 The mall should have marked the tree with reflectors or something, the Court said. Something to reflect on… like our old Cougar. Now that was a cherry ride.

Mr. Miller had entered the Shopping Center from West Main Street intending to drive across the lot to reach Canyon Lake Drive, the street on the south side of the Center. They had never travelled over this area before but had seen others do so. It was a misty, gloomy night with wind and gusty rain. Suddenly, a tree loomed in front of them. A collision ensued.

Miller and his wife sued Baken Park, and Baken Park counterclaimed against Miller for negligence. The evidence showed a driver would have had to swerve to miss the tree, and the conditions that night made it hard to see after the shopping center lights were turned off at 10 p.m. The tree, which had an 8” trunk, bore scars from prior vehicle collisions. The trial court considered the question of Baken Park’s negligence, contributory negligence by Miller and other issues it deemed appropriate. The jury found for defendant and plaintiffs appealed.

George of the Jungle could have advised Mr. Miller – watch out for that tree!

Held: The trial court was reversed. The Supreme Court held that the evidence was sufficient to authorize finding that Baken Park was negligent in allowing a tree without reflectors or other warning devices to remain in an area that not only served as a parking lot for customers of its lessees, but in the area used by them as a driveway. The Court said that a shopping center owner that maintained control of its parking lots and driveway for express purpose of serving customers of its lessees owed the business invitees of its lessees a duty to keep the premises in a reasonably safe condition. What’s more, the fact that Miller may have been negligent in driving through the dark lot was not imputable to his wife in the absence of some control or authority over operation of the car by her. His negligence thus would not prevent her from recovering against the shopping center for injuries sustained because of the concurring negligence of her husband and a third person.

The shopping center’s counterclaim against Mr. Miller had been dismissed by the trial court. The Supreme Court agreed that dismissal was proper under South Dakota’s guest statute, which immunizes a driver from liability to a passenger unless he was acting with recklessness or willful conduct. The Court held that the statute applied even to accidents on private property, and thus, Baken Park’s counterclaim against Miller had to be dismissed.