A SINGLE PINE AMONG A THOUSAND OAKS

A lone pine … but not in Thousand Oaks

Alert reader Rock Maple wrote us recently with a very good question. His inquiry is deceptively simple. He has a lone pine in Thousand Oaks, California. Rock asks: “I have a 50 year old pine tree and it is now overhanging on the neighbor’s property. He wants it trimmed back. I have refused. Can he legally trim my tree back?”

“Well, sure he can!” the rest of you readers say. After all, you’re fairly expert at the Massachusetts Rule. Normally we would agree. But this is California we’re talking about, so nothing’s simple.

We’ll answer Rock’s question over the next three days, looking at how common-law notions of self-help enshrined in Michalson v. Nutting, the grand-daddy of encroachment cases that gave use the Massachusetts Rule, are applied in California.

In today’s case, Bonde v. Bishop, Mr. Bishop had a big old white oak tree he loved as much as our reader is attached to his pine. But the oak was overhanging his neighbor’s place, and his neighbor wanted it trimmed back. Sound familiar? But Mr. Bishop’s oak had some problems. It shed branches quicker than the Trump Administration sheds top-level appointees. It had already taken out Mr Bonde’s fence, his garage and (very nearly) his head. Cleaning up after the tree was a daily chore, and the old tree was so dangerous that the Bondes wouldn’t leave their baby on the patio (probably a good idea, tree or no tree, but that’s a parenting decision).

The Bondes asked Mr. Bishop for permission to trim the tree, but he told them to touch not a single bough, or he’d sue. So they sued Mr. Bishop first, this being California (or just this being America), asking the Court to declare the tree a nuisance and force him to remove it.

The Court agreed. California does indeed follow the Massachusetts Rule, which meant that the Bondes had the right to trim the tree’s branches overhanging their property. But here, the problem went beyond that. Mr. Bishop’s white oak was a nuisance under California law, the Court held, because of the pervasive damage it caused. The Court, perhaps reacting to the extent of the mess as well as Mr. Bishop’s intransigence, ruled that a tree owner is liable for damage — even insignificant damage — is caused to his neighbor.

So, as we knew all along, our reader’s neighbor would have the right to trim the tree back to the property line. In fact, if the 50-year old pine is a persistent branch-shedder, it might be a nuisance, and our reader’s refusal to let the neighbor trim it could leave him in Mr. Bishop’s position: having to remove the offending branches himself.

But — and this is California, so there’s always an “on the other hand” — as we will see tomorrow, there are limits on what the neighbor can do, even on his own property. 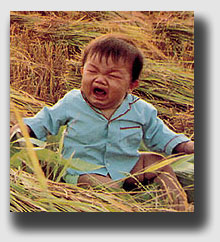 The Bondes could no longer park their kid on the back patio, out of fear that a falling branch would bean him. The bambino was not happy …

Bonde v. Bishop, 112 Cal.App.2d 1, 245 P.2d 617 (Ct.App. Div. 1, 1952). Some of the branches of Bishop’s white oak tree were overhanging Bonde’s property by 25 feet, about 40 feet off the ground. Early one September morning, a large limb broke loose from the tree, smashed through Bonde’s garage and destroyed a section of fence. Bishop said it was not his responsibility, and Bonde’s insurance paid for repair. The tree continually dropped smaller branches on Bonde’s roof, driveway and patio. One small branch almost hit Bondes while he was standing in the middle of his driveway. During the rainy season it became a two-hour job every Sunday to clear tree debris from the gutters and the drainspouts. The Bondes were afraid of the overhanging limbs, and stopped leaving their baby out in the patio.

The debris required the Bondes to sweep the patio and driveway daily and rake the lawn before mowing. They put screens on the gutters so they would not be required to clean them. When Mrs. Bonde told Mr. Bishop that the Bondes desired the tree cut back to their line, he not only refused but warned her that if they had it cut back and damaged the tree in any way, he would sue them. Nevertheless, after the limb fell Bishop had the foliage thinned out. Finally, Bonde sued Bishop, asking the trial court to declare that Bishop’s tree was a nuisance.

The court agreed, and ordered Bishop to abate the nuisance and awarded damages.

Held: The Court agreed the tree was a nuisance, and ordered Bishop to abate the nuisance. The Court explained the rule in California generally is that to the extent that limbs or roots of a tree extend upon adjoining landowner’s property, the adjoining owner may remove them, but only to the property boundary line. Nevertheless, the remedy isn’t exclusive. An owner of a tree, the branches of which overhang adjoining property, is liable for damages caused by overhanging branches. The Court said that even insignificant damage is enough for the statute — might this include falling leaves in the fall, one wonders — because the significance of the damages goes to the amount the plaintiff can recover, not to whether the plaintiff has a case on which to sue to begin with.

But, the Court said, absent the tree being a nuisance, no landowner has a cause of action from the mere fact that branches overhang his premises. Instead, the adjoining landowner’s right to cut off the overhanging branches is a sufficient remedy, indeed, the only remedy. In order to obtain a court owner that the tree’s owner do something, an adjoining landowner must show that the tree is a nuisance under the nuisance statutes.

The Court observed sadly that “apparently this is one of those rows between neighbors in which the defendants are standing on what they erroneously believe to be their strict legal rights to the exclusion of any consideration of the fair, decent, neighborly and legal thing to do.”