SMOKE GETS IN YOUR EYES 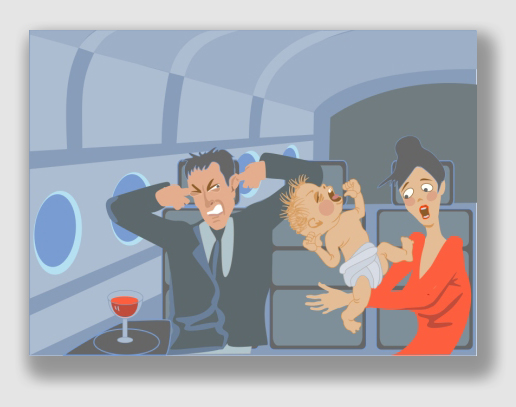 Anyone who’s ever sat next to a screaming baby on a red-eye flight knows “nuisance.” But what “nuisance” means in law may not be quite as readily identifiable as the wailing infant in seat 7B.

So just what constitutes a nuisance causing enough interference with an owner’s enjoyment of property to justify court action? The Haffners found out that wherever the line may fall, it was beyond the suffering they endured. And, in the process, they may have learned that the law is a poor bludgeon.

The Haffners had lived in the same house since 1977. The Clarks – who happen to run a tree service (but that’s not central to the case) – lived about 50 yards east of them, and the Nelsons live about 40 yards to the west. That wasn’t a problem until the Clarks and Nelsons became smokers.

They weren’t using tobacco, or even pot (this not being Colorado). Instead, they both installed rather old-fashioned but new-fangled outdoor wood furnaces. The Clarks were true early adapters, having used a wood-burning furnace since 1984. (Being tree trimmers, they had an abundant supply of fuel). The Nelsons installed their high-tech outdoor wood-burner in 2008.

Choking on the enveloping smoke, the Haffners sued, alleging that the Nelsons’ and Clarks’ furnaces “generated smoke, soot, noxious fumes, and fly ash, which damaged their property, caused them physical injury, and reduced the value of their property, as well as infringed on their use and enjoyment of the land.” The Haffners asked for an injunction from the court ordering the neighbors to quench their fires, along with some money to ease their suffering.

The case should have been a dead bang winner for the Haffners. Iowa law requires that people use their own property in a manner that will not unreasonably interfere with or disturb their neighbors’ reasonable use and enjoyment of their property.” In fact, Iowa Code § 657.2 specifically defines “[t]he emission of dense smoke, noxious fumes, or fly ash in cities [as] a nuisance …”

But their victory went up in smoke. It turned out that the Haffners were living in a glass house, having operated their own wood furnace for 20 years. They couldn’t very well prove any damage to their property or health arising from the Nelsons’ and Clarks’ wood furnaces when they were generating smoke with their own furnace like a politician on the hustings.  The medical maladies the Haffners said were caused by the smoke existed year around, even when the furnaces were stone cold during the summer. Other neighbors who lived nearby testified that they had not been bothered by the Clarks’ and Nelsons’ furnaces.

We know what you’re thinking: there must be a backstory here. Indeed. There was some evidence of animosity between the Haffners and their neighbors that had nothing to do with smoke.

Haffner v. Clark, 795 N.W.2d 99 (Court of Appeals, Iowa, 2010). The Haffners lived between the Clarks and the Nelsons. In about 1984, the Clarks installed a wood-burning furnace to help heat their home. The Nelsons installed an outdoor wood-burner in 2008.

The Haffners sued, alleging that smoke, soot, fumes, and fly ash infringed on their use and enjoyment of their land. The Haffners asserted claims of nuisance, negligence, assault and trespass, and sought a court order that the Clarks and Nelsons stop using their furnaces, and for damages.

The trial court found that the furnaces were not a nuisance, and that the Haffners delayed unreasonably in suing (which is to say it accepted the defense of laches and estoppel).

Held:  The appellate court held that the Haffners had failed to prove the neighbors’ smoke was a nuisance.

The law of nuisance directs that “parties to use their own property in a manner that will not unreasonably interfere with or disturb their neighbors’ reasonable use and enjoyment of the neighbors’ property. A private nuisance is an actionable interference with a person’s interest in the private use and enjoyment of the person’s land.” The definition of a nuisance is “[w]hatever is injurious to health, indecent or unreasonable offensive to the senses, or an obstruction to the free use of property, so as essentially to unreasonably interfere with the comfortable enjoyment of life or property…”

The Court of Appeals observed that in determining whether an activity is a nuisance, the standard is whether normal people in the community would regard the conduct as “definitely offensive, seriously annoying or intolerable.” Under this standard, the Court agreed that smoke, odor and other attacks to the senses could constitute serious harm. The Court admitted that saving on fossil fuels might be a societal benefit, but it was of minimal utility compared to generating foul smoke.

Nevertheless, the Haffners’ complaints did not a nuisance establish. The Haffners – who themselves had owned their own wood furnace for 20 years – were unable to present evidence proving any damage to their property or health arising from the Nelsons’ and Clarks’ wood furnaces. The medical conditions that the Haffners alleged were caused by the smoke existed year around, even during the summer. Other witnesses living nearby testified that they had not experienced any smoke infiltration, odors, fumes, or fly ash from the Clarks’ and Nelsons’ furnaces.

The Court found it was material to its decision that the Haffners had waited 20 years before lodging any complaint with authorities, and noted in passing that there was evidence that the Haffners and their neighbors did not get along for reasons that had nothing to do with furnaces.