It is almost an anachronism. A Tennessee movie theatre is airing the movie “Hellboy,” but so as not to offend, it has listed the flick on its marquee as “Heckboy.” 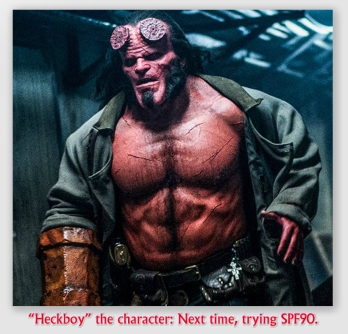 “Hellboy,” of course, is a 2019 American supernatural superhero film based on the Dark Horse Comics character of the same name. I know this because I looked it up on Wikipedia, not having any independent knowledge of who this mutt character might be. Heckboy looks like a Hell’s Angel who fell asleep under the summer sun having forgotten his sunblock. But then, the movie industry hardly has me in mind when it looks to get into consumers’ pocketbooks. Lucky for them.

Suffice it to say that my heart warmed that in this raucous day and age, some people still think that “Hellboy” is an offensive term.

I bring this all of this up because of the Heckerts (not a Bowdlerization of “Hellert”), who are the plaintiffs in today’s case. While lacking a sunburn and probably a set of the Hell’s Angels colors, the Heckerts nonetheless were bikers. At least they were until they ran into a tree branch that had fallen over a rural Ohio road. In true, merciless Hell’s Angels fashion, they sued the County and poor old Mary Weinman, who owned the woods in which the limb-shedding tree stood.

But Mary was ready to rumble, and by the time she was done, the Heckerts had had a heck of a time. Mary had no duty to inspect, and because the Heckerts could not show that Mary knew anything about a hazard tree on her land, she owed them nothing. 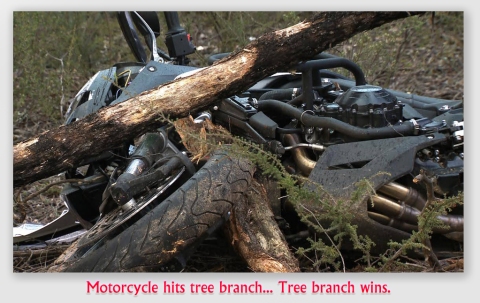 Heckert v. Patrick, 473 N.E.2d 1204 (1984). The Heckerts were riding their motorcycle on a country highway in rural Stark County, Ohio, an area of mainly farmland and forest areas. Without warning, a large limb fell in front of their motorcycle. They collided with it, injuring them badly and damaging the motorcycle. They sued Mary Weinman, who owned the land on which the tree stood.

Mary inherited the property from a relative. She lived in an adjoining county, and hardly ever visited the land. She had no idea of any decay or disease in any tree on the property.

A county inspector testified that during the years prior to the accident, he had patrolled the road at least twice a week, and that the tree appeared to be healthy. He said his opinion was that there was no danger of the tree limb falling onto the road. Photographs in the record confirmed this.

The trial court granted summary judgment to Mary and the County (which had also been named as a defendant in the suit).

The Heckerts appealed, and eventually, the case ended up in the Ohio Supreme Court.

Held: Mary and the County were not liable.

The Court held that in Ohio, generally, an urban owner has a duty to inspect his or her trees to ensure they are safe. By contrast, a rural landowner has no duty to inspect every tree on his or her property, but if the rural owner has knowledge — actual or constructive — of a defective condition of a tree that may result in injury to someone using a highway next to the property, the owner must exercise reasonable care to prevent harm from the falling tree or branches.

The Court recognized that suburban sprawl was causing increasing difficulty in differentiating between rural and urban land, but noted the distinction may have more to do with the location of the highway, its size and type, as well as the number of people utilizing it, than any other factors.