WON’T YOU BE MY NEIGHBOR?

And all this time, there was a nice old hedgerow between the two houses, and the neighbors jointly and lovingly maintained it. A couple of stately elms stood on the Roes’ side of the hedge, and they raked under them, had them trimmed, and mulched around their bases.

After 30 or 40 years passed, the Johnsons sold to Alice Avarice. The first thing she did was have the property surveyed. Lo and behold, the hedgerow was not the boundary between the properties. Instead, the line was 10 yards to the other side, meaning that the two elm trees had never belong to the Roes and their successors, but always to the Does and their successors.

Something just doesn’t seem, well, seem very fair about the whole thing. “The law’s the law,” Alice cackled as she erected the chain-link fence along the new property line.

Of course it is, which is the whole point of this blog. But exactly what does the law say about Alice’s claim?

Welcome, Alice, to the doctrine of “acquiescence.” The Does acquiesced to the Roes caring for everything on the other side of the hedgerow, and the Roes acquiesced to doing so. The subsequent owners did as well, for 50-plus years, until Alice came along and riled everyone up. Under the doctrine of acquiescence, the boundary line became what the parties had always considered it to be.

Where’s Fred Rogers when you need him?

Guthrie v. Jones, 780 N.W.2d 248 (Court of Appeals, Iowa, 2010). The Guthries’ property abutted land owned by Jones. A line of shrubs and trees ran along one side of the adjacent properties, and the Guthries had always believed that the tree line marked the property boundary.

It didn’t. Instead, a 2007 survey by neighbor Jones showed the property line to be 10 feet to the west of the line of shrubs and trees.

The Guthries had gotten used to thinking they had 10 feet more room in the side yard that they really did, so they brought suit, arguing that under Chapter 650 of the Iowa Code, the shrub and tree line – not the surveyed line – should establish the actual boundary. The Guthries argued that the Joneses had agreed to the property line being marked by the trees, an argument known as “acquiescence.”

The trial court found that the boundary line between the two properties was established by the survey, because the Guthries did not prove the Joneses’ acquiescence.

Held: The appellate court affirmed the trial court. Iowa law governing boundaries by acquiescence holds that “a boundary line may be established by a showing that the two adjoining landowners or their predecessors in title have recognized and acquiesced in a boundary line for a period of ten years.” The owners’ recognition may be evidenced by conduct or by claims asserted by the parties, but it must be by both parties. The acquiescence by both parties is a condition precedent for proving the existence of a boundary by acquiescence.

The party seeking to establish a boundary line that deviates from the surveyed boundary line must prove acquiescence by clear evidence. This is a higher standard that the usual civil standard of proof, which is “preponderance of the evidence” (which means, essentially, by a majority of the evidence). 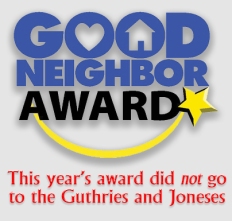 In this case, the appellate court agreed with the trial court that Jones did not consent to the shrub and tree boundary line for the required 10-year period. The Guthries purchased their lot in 1979. At that time, the seller placed metal pins in the ground to mark the boundary line. Subsequently, the Guthries used the pins as a guide for mowing. Jones did not object to use of the land “close to, if not over the surveyed boundary line.” However, the court reasoned that this failure to object constituted nothing more than a neighborly gesture, and fell far short of showing Mr. Jones’ consent to a new boundary line.

At trial, Mr. Jones asserted that he maintained the area in question since 1989, and did not recognize the shrub and tree line as the true boundary. The Guthries didn’t have sufficient evidence to disprove this. Thus, the Guthries failed to prove their claim for acquiescence.