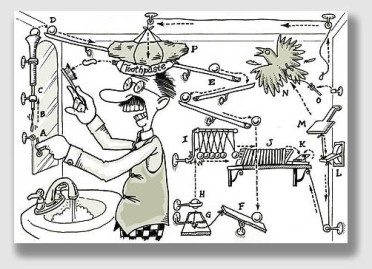 In my years in the business, I have see negligence claims that run from the ridiculous to the absurd: such as, the corrections officer who sued cellphone carriers because inmates made calls using the carriers’ system during which they conspired to shoot him, or the victim of a falling limb who sued an electric utility because its tree trimmer should have noticed that a tree that the company had no right to trim was dangerous.

The case we’re looking at today features a tortuous and complex argument that would make Rube Goldberg envious. A tree branch fell in a storm and knocked out power to a subdivision. Matthew Phillips and his father decided to fire up their standby generator and plug it into the house system, a few hours of darkness being too big an inconvenience for them to bear.

Something happened. No one’s sure what. But, if you believe the Phillips’ lawsuit, the downed branch crossed some wires, which fed power past and around a transformer, bypassing several obvious shorts it could have taken to ground, then into the house, into the power lines, bypassing yet other ground circuits, into and through meter boxes, into the ground line of the home but not safely to ground, but rather into the power line leading to the generator, where the electricity finally leapt into Matthew, seriously injuring him.

Of course it’s unlikely that Matt or his Dad did anything stupid, like failing to disconnect the master switch connecting the house to the power grid. Much more likely that electricity defied several laws of physics, and that the blame must rest with the tree trimming company for not having pruned back the branches that fell in the storm. Or maybe it was ball lightning. Or Zeus throwing lightning bolts.

The problem was a practical one: Matt’s family didn’t have the wherewithal to pay the medical expenses. Neither did Zeus. But the electrical utility and its vegetation management contractor did. Thus, the inevitable lawsuit followed.

Fortunately for all of us, common sense prevailed. The courts pointed out that Asplundh, the tree trimming company, had a contract with AEP, and that the contract did not create a duty between Asplundh and Matt. The contract only let Asplundh cut where the utility told it to cut. The Court very reasonably pointed out that if Asplundh had done what Matt said it should have done – that is, to trim trees on the Phillips property – it would have been a trespasser and subject to treble damages.

Where the claim is nonfeasance – that is, where the defendant is alleged to have wronged the plaintiff by not doing something it should have done – the law demands that the duty the defendant owes the plaintiff must be very clear. Where the contract does not permit the tree trimmer to do anything other than what the utility tells it to, the trimmer lacks the ability to exercise any independent authority. In that case, the fact that it did not do that which it was not allowed to do doesn’t make the trimmer wrong. Instead, it makes it prudent.

Sadly, in this litigious society, it doesn’t make it lawsuit proof.

Phillips v. American Electrical Power, 2011 Ohio 6731 (Court of Appeals, Jefferson County, 2011). An early March thunderstorm rolled through Wintersville, Ohio. During the storm, the power went out when a tree branch fell across an Ohio Power electrical distribution line. Matt and his father tried to power their house with a portable electric generator. In the process of trying to operate the portable generator, Matthew received an electrical shock and suffered very severe injuries, including permanent brain damage.

Matt sued American Electric Power Company, Inc. and a laundry list of affiliates and subsidiaries, as well as Asplundh (which had a tree maintenance contract with AEP) for negligence. His reasoning, as far as the courts were able to surmise, was that one or more rotten trees were blown down in the storm, which caused the power to go out, which caused the Phillips men to try to connect their portable generator to power the house wiring. Matt claimed that the power line wires had became coupled due to the fallen branches, creating a completed electrical circuit, which sent electricity around the electrical transformer on the pole outside the Phillips residence – bypassing the grounding wires located at the pole – and down the service line to the house, through the meter box into their breaker box (somehow bypassing the grounding line at the breaker box), into the ground circuit wiring of the house, then around an electrical generator transfer switch the Phillips had installed, then through the grounding line to a secondary electrical outlet box, where it connected to the box’s metal chassis. Matt posited a variety of theories as to how the electricity passed through him via the outlet box, the portable generator, or from the ground.

No one knows exactly what happened, but it was a cinch that Asplundh Tree Service wasn’t to blame.

At some point, the Phillips settled with everyone except Asplundh. The tree service then filed a motion for summary judgment, arguing it owed no duty of care to Matthew because AEP determined the locations where Asplundh was assigned to work, and because AEP never assigned Asplundh to inspect or service the area at issue in this case. The trial court granted summary judgment, finding no evidence that AEP assigned “Asplundh to work on the portion of the electrical circuit in the area of the tree which allegedly caused the injuries to the Plaintiff. Nor have the Plaintiffs produced evidence that it was the responsibility, or duty, of … Asplundh to determine which parts of the AEP distribution circuit were to be trimmed. Rather the evidence establishes that… AEP… determined what trimming was to be done and then would assign that work to… Asplundh.” Finally, the trial court said, no evidence showed that Asplundh created a condition which caused the tree to fall or failed to trim the tree after being put on notice of the need to do so.

Held: Asplundh was not liable for Matt’s injuries.

Matt’s lawyers fired a blunderbuss of claims against Asplundh: ordinary negligence, failure to maintain AEP’s easement, failure to remove foreseeable safety hazards, and failure to fulfill its contractual duties to inspect and manage vegetation for AEP. Matt claimed he subjected to an ultra-hazardous danger by Asplundh’s recklessness, and that Asplundh breached a duty imposed by safety statutes and regulations regarding electrical and hazardous substances and vegetation management. He also claimed Asplundh failed to warn, prevent or remedy unnamed defects, and that Asplundh caused them to be exposed to hazardous or toxic substances.

The Court of Appeals noted that Matt’s allegations against Asplundh “are intrinsically connected to the contract to perform right of way maintenance. Thus, the overall claim is for negligent or reckless performance of a contract,” and every issue on appeal boiled down to one question: did Asplundh owe a duty of care to Matthew in light of the contract that Asplundh entered into with AEP.

The Court noted that the existence of a duty of care is fundamental to a negligence claim: “It is rudimentary that in order to establish actionable negligence, one must show the existence of a duty, a breach of the duty, and an injury resulting proximately therefrom. The existence of a duty depends on the foreseeability of the injury.” Matthew contended that Asplundh owed him a duty of care, despite the absence of anything specific in the Asplundh contract that would have required the removal of the tree that apparently fell in the Phillips’ yard. Matt argued that Asplundh should have inspected the area near the Phillips home because there had been many prior electrical outages in that general area. He maintained that Asplundh was involved in the decision-making process to select which of AEP’s circuit areas were to be trimmed each year, despite the evidence showing that only AEP made the final decisions about where Asplundh would do its vegetation maintenance and trimming. Essentially, Matt contended that Asplundh’s authority to make suggestions at its annual meeting with AEP to determine vegetation maintenance was enough to give rise to a duty to protect Matt from the Rube Goldberg chain of events that began with a dangerous tree. In other words, Matt said that Asplundh’s failure to convince AEP to conduct tree maintenance on or near the Phillips place was itself a form of negligence.

The Court of Appeals disagreed, holding that none of Matt’s claims were supported by the record. In a case of nonfeasance, it said, the existence of a legal duty is critical and, unless a duty is established, Asplundh’s failure to act cannot create liability. In this case, AEP personnel testified that Asplundh had never been directed to trim trees in the area where the Phillips lived. Asplundh was permitted by its contract to patrol for danger trees only where AEP told it to do so. AEP picked those areas according to its own internal data, devoting attention to the 8% of circuits with the worst performance in the previous year. There simply was no independent decision-making or freelancing involved on Asplundh’s part. While some of Asplundh’s employees may have made suggestions at the annual planning meetings, the record reflected that the final decision was made by AEP, and there is no evidence to contradict this conclusion.

The Court of Appeals agreed with Asplundh that it could not have a duty to trim a tree in the Phillips yard unless it first had a right to do so, and there are very specific statutes which prohibit a person from cutting, removing or injuring trees on private property. If Asplundh had no contractual authority to act as AEP’s agent and enter the area where the tree was located, the Court said, it would have been trespassing had its personnel entered the property, and would have been committing a fourth degree misdemeanor crime and setting itself up for treble damages under O.R.C. § 901.51.

Matt argued that his injury was so foreseeable that the foreseeability of the injury alone created a duty for Asplundh to remove the dangerous trees. The Court rejected this argument, holding that foreseeability alone is not always sufficient to establish the existence of a duty, especially in nonfeasance situations in which the injured party is alleging that the defendant failed to affirmatively act to come to aid of a person in danger or failed to prevent a third party from harming another. In such situations, a duty arises only if the defendant shares a “special relation” with the injured party that justifies the imposition of the duty. Here, the Court said, the alleged relationship between Asplundh and Matt “only exists by virtue of the tree-trimming contract between Asplundh and AEP. No amount of foreseeability can create a contractual duty where none otherwise exists.”

The appellate court concluded trial that Asplundh was under no contractual obligation to investigate or perform tree maintenance services in the area of the Phillips residence where the accident occurred: “Because there is no proof in this record that a duty existed,” the Court of Appeals held, “the trial court was correct in its judgment.