SOMEBODY OWES ME MONEY

Recall the recent creative lawsuit we covered, in which Corrections Officer Johnson going after area cellphone carriers for having recklessly built towers close to a prison. Some of the inmates obtained contraband cellphones. The towers ensured they had excellent 4G service. Of course, the towers also ensured excellent coverage to the motorists on I-20, only a half mile from the prison. The Court’s tallest order was addressing all the ways that Mr. Johnson’s lame attempt to find someone with a deep pocket was simply vibrating nonsense.

“OK,” you say, “but that was just some ambulance chaser’s attempt to shake down a phone company (an attempt most of us applaud once a month when the cell bill arrives). But that cannot happen in the staid world of arboriculture law.”

In response to that sentiment, we give you the Huffs. After a tree broke off in a storm and hit Lisa Huff on the noggin, she had little to go on other than the abiding sense that someone owned her money. But who? Sure she could sue the property owner. Any regular reader of this blog knows that. But the Huffs needed a deep pocket. After all, Lisa had been injured. Someone had to pay.

Problem: the tree wasn’t exactly inside the Ohio Edison easement. But that was a mere technicality to the Huffs, who argued that Ohio Edison hired Asplundh Tree Service to keep the trees trimmed away from the power lines, and that both the power company and the tree service must have known the tree that fell on Lisa was dangerous. This was the tort claim, and it might have merit if Lisa could prove they had actual or constructive notice of the tree.

But never stop with just alleging a tort, where you can pile on other legal theories as well. The Huffs’ attorney suggested a contract count, too. The Huffs, so the legal theory went, were the intended third-party beneficiaries of the contract between Ohio Ed and Asplundh. A third-party beneficiary can sue for a contract breach just as if she had signed the document herself. Asplundh had a contractual obligation to inspect and trim the trees to as to keep the public safe, the Huffs argued, and that included the passing public, which included the walking public, which included Lisa. Anything to get Ohio Edison and Asplundh to open their checkbooks!

It was a novel theory, but the Ohio Supreme Court shot it down. The Ohio Edison – Asplundh agreement was intended to secure services that would keep the power lines clear. While the agreement did require that Asplundh perform the trimming in a safe manner so as not to hurt anyone while it was doing it, that requirement only lasted as long as Asplundh was trimming. The Court wasn’t about to interpret the contract so broadly as to grant contract causes of action to millions of people who were never intended by the signatories to gain party status to a contract. You think the courts are busy now (and insurance premiums are high)? Just wait …

The takeaway here is a passing observation by the Court that parties to a contract can avoid the litigation spawned here by the Huffs simply by stating clearly that their contract is intended to benefit no one but each other. Including such a provision is a cheap preventative to the kind of nonsense lawsuit decided here.

Huff v. FirstEnergy Corp., (2011), 130 Ohio St.3d 196 (Supreme Court of Ohio). During a heavy thunderstorm, a large sugar maple tree split about 25 feet above the ground. A large limb from the tree hit Lisa Huff, who was walking along a country road, causing serious and permanent injuries. Lisa G. Huff was injured during a walk along a country road.

Ohio Edison maintained an easement near the tree, but the tree was outside the easement. The tree did not present a hazard or threat to the power lines owned by the utility. Ohio Edison had hired Asplundh Tree Expert Company to inspect trees and vegetation along its power lines in this area and to remedy any situation in which trees or vegetation might affect the lines. Ohio Edison and its contractors carry out this work to ensure that adequate clearance is maintained around electric lines. Generally, Ohio Edison deferred to Asplundh’s decisions regarding tree and vegetation maintenance and would perform an overview inspection only to determine whether any vegetation was growing into the electrical wires or equipment. Asplundh had last been in the area where Huff’s injury occurred three years before.

Ohio Edison and Asplundh filed motions for summary judgment. Ohio Edison argued that it didn’t know that the tree was dangerous, that it owed and assumed no duty to Huff regarding the tree, and that it was not negligent and did not proximately cause or contribute to Huff’s injuries. Asplundh argued that it owed no duty to Huff and that its activities did not proximately cause the injury to Huff.

The trial court found that while the tree leaned about ten degrees away from the power lines, “there is absolutely no credible evidence about when the tree began to lean or if it was leaning because of the way it grew.” It also noted that the Huffs admitted that no one knew when the tree became a hazard. With no proof that Ohio Edison or Asplundh actually inspected the tree or removed any branches, the court held that the Huffs failed to show that either company ever had actual or constructive notice of any decay of the tree. Due to the tree’s location – leaning away from the power lines with no limbs near the power lines – Ohio Edison and Asplundh owed no duty to the Huffs.

The Court of Appeals cited the portion of the contract providing that “[Asplundh] shall plan and conduct the work to adequately safeguard all persons and property from injury” could be read in two ways: (1) a narrow reading that provides Asplundh must protect all persons from injury while Asplundh works on the site or (2) a broad reading that requires Asplundh to protect all persons from injury at all times, regardless of when the work is done. The court found the contract to be ambiguous, and reversed the trial grant of summary judgment to Ohio Edison and Asplundh.

The companies appealed to the Ohio Supreme Court. 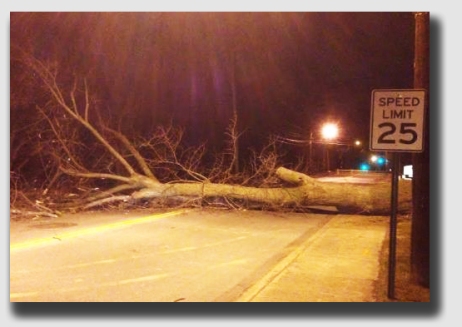 In this case, the Court ruled, nothing in the agreement between Ohio Edison and Asplundh showed any intent to benefit the Huffs. The Huffs pointed to a part of the contract that they argue shows such an intent: an attachment to the agreement entitled “FirstEnergy Vegetation Management Specifications” that provided  the “Contractor shall plan and conduct the work to adequately safeguard all persons and property from injury.” The Huffs contended that this statement assigns to both Ohio Edison and Asplundh clearly defined duties – to safeguard the public – for the Huffs’ benefit.

The Court held however, that the contract wasn’t entered into for the general benefit of the public walking on public roads, but instead was designed to support Ohio Edison’s electrical service. The purpose of the contract is to ensure that Ohio Edison’s equipment and lines are kept free of interference from trees and vegetation. The remainder of the contract sets forth how this work is to be carried out, including the standards by which Asplundh is to perform its work, the limits on liability for the performance of the work, and the necessary qualifications for the Asplundh employees who were to perform the work. The contract contains no language establishing an ongoing duty to the general public on behalf of either Ohio Edison or Asplundh.

The vegetation management provision incorporated into the contract provides that “[t]he objective of all work covered by these documents is to maintain reliable and economical electric service, through effective line clearance and satisfactory public relations.” The Court observed that working near electrical lines has its inherent hazards, and it was thus “clear that this portion of the agreement establishes safety guidelines designed to protect persons and property from injury while the contractor performs its work. This period is finite: until the work has been completed … [T]he agreement cannot be plausibly read to require Ohio Edison or Asplundh to safeguard all persons from injury at all times, regardless of when the work is completed.”

The Supreme Court concluded that the Huffs thus failed to qualify as intended third-party beneficiaries of the Ohio Edison ­– Asplundh agreement.