DO WE DETECT SOME HOSTILITY HERE?

We’ve all heard of adverse possession, that weird and perhaps outdated legal doctrine that lets people with sufficient chutzpah get title to real property they don’t own. Want your neighbor’s house (and you know coveting it is not allowed), all you have to do is take possession of the place, and ensure that your possession is open, notorious, exclusive and hostile continuously for a period set by statute (from five to 21 years, depending on state law).

Easy for us to say, you might be thinking. But what does it mean?

We all have notions of what “hostile” means, but for purposes of adverse possession, that’s not it. In today’s case, a small cemetery association had been using a gravel road it had gotten the right to by a poorly drafted easement in an 1880 deed (the year James Garfield became president). The people who remembered the Association had an easement were still around, although about 6 feet deeper than they had been back then.

The cemetery association members had been dumping dirt on the land next to their easement, but they stopped when Calvin Coyer, the neighbor, asked them to, because they wanted to be “good neighbors.” No hostility there. But they still parked cars on the Cal’s land, while giving Cal “permission” to graze his herds there. But at last there came a time when the Association wanted to clean up its property lines, and – discovering it did not own the land its people had been parking on – the Association sued Cal for ownership under the doctrine of adverse possession.

Nice guys finish last. Because the Association always thought it owned the property, Cal argued, it couldn’t have possibly possessed the land with any hostility. Not so, the Court of Appeals said. The “hostility” element of the doctrine of adverse possession is satisfied where the possessor thinks he or she owns it, or where he or she knows someone else owns it but intends to possess it anyway. Malcolm Forbes was right! “Contrary to the cliché, genuinely nice guys most often finish first or very near it.”

Union Cemetery Ass’n of Crawfordsville, Linn County, Oregon v. Coyer, 214 Or.App. 24, 162 P.3d 1072 (Ct.App. Oregon, 2007). The Union Cemetary Association operated a 3.69-acre cemetery surrounded by Calvin Coyer’s 81 acres of grazing land. Coyer’s land connected the cemetery to a 28-foot wide roadway that, in turn, connected to a public road by means of a 14-foot wide gravel road. The 100-year old gravel road provides the only access from the public road to the cemetery.

The Association received a deed in 1880 for a “right of way for a wagon road” as to a portion of the gravel road in 1880 and to another parcel of property. In the final sentence of the deed, the grantors stated that they “hereby relinquish and quitclaim all our right, title and interest in said premises.” However, the sentence did not specify whether the described “premises” just included the “right of way” which became the gravel road or whether the “premises” consisted solely of the other property conveyed under the deed.

Finally, when a dispute arose, the Association filed an action for quiet title, seeking a declaration that it owned the entire subject property in fee simple based on either a conveyance or adverse possession. After trial, the court found that, by virtue of the 1880 deed, the Association held title to an 18-foot roadway, and owned the remaining 22-foot width of the subject property by adverse possession or, in the alternative, that plaintiff had established an easement by prescription over the entire subject property.

Coyer appealed, challenging the conclusion that the Association’s possession of the land was hostile. 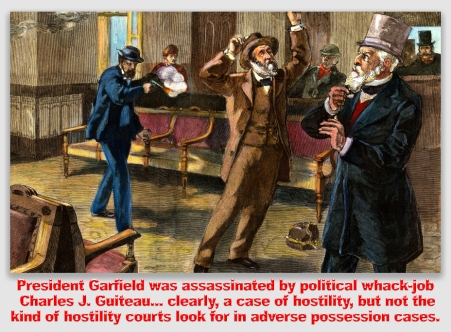 The requirement for actual use is satisfied if the plaintiff establishes a use of the land that would be made by an owner of the same type of land, taking into account the uses for which the land is suited. A use is “open and notorious” if it is of such character as to afford the owner the means of knowing of the use and the adverse claim. A use is “hostile” if the plaintiff demonstrates a subjective intent to possess the property, intending to be its owner and not in subordination to the true owner.

To establish hostility, an adverse possession claimant must show either that its possession of the disputed property was under an honest but mistaken belief of ownership, or that the possessor subjectively intended to possess the property intending to be its owner. Here, the Court ruled, the testimony of the Association’s board members that they believed the Association owned the 40-foot strip of land, but as a good neighbor, gave Coyer permission to corral his cattle and park farm equipment on the strip in a way that didn’t conflict with the Association’s use of the road for cemetery traffic, was sufficient to show that the Association believed — even if mistakenly — that it owned the property. That established hostility for purposes of the adverse possession claim.