DAMNED IF YOU DO…

Yesterday, we read about Mamie Segraves, who successfully sued an electric utility because its workers determined that trees within its easement posed a risk to the distribution lines, and that one should be removed and the other topped.

Segraves taught us that in Missouri, the utility’s judgment that a tree needs to be removed does not mean much if the homeowner wants it preserved. Today, from the Damned If You Do, Damned If You Don’t Department comes another Missouri decision, in which a utility is held liable because the landowner wanted a tree in the easement area removed, but the utility did not see the need.

When Greg Fenlon noticed a hazard tree he believed threatened his local power grid, he called the electric company. It’s crews, unfortunately, were uninterested in taking direction from Greg and, to make matters worse, did not perform their duties much to Greg’s liking. He wanted the hazard tree removed. They demurred.

After the crew headed off for coffee and doughnuts, Greg hired a crew that would take direction from him (because he was paying them). Greg’s crew removed the tree, and Greg sent the bill to Union Electric. Union sent it back.

Greg was as serious about litigation as he was tree removal. He sued Union Electric for the cost of his tree-cutting crew. And he got further than you might think.

Fenlon v. Union Electric Co., 266 S.W.3d 852 (Court of Appeals of Missouri, Eastern District, 2008). Greg Fenlon was not a guy to let a job go undone. When he noticed a dangerous tree interfering with Union Electric wires, he contacted the utility to report it. Union Electric sent a couple of men in a truck, who trimmed back a few branches but refused Greg’s demand that they cut down the hazardous tree (despite the fact it was inside the utility’s easement). So Greg did the job himself, hiring a contractor to cut down the tree. He then sued the utility for the cost of the removal.

The trial court dismissed Greg’s claim, and he appealed. 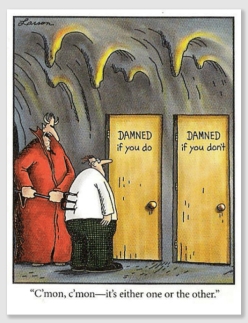 The Court observed that suppliers of electricity must exercise the highest degree of care to maintain their wires in such condition as to prevent injury, citing the Missouri Supreme Court’s Gladden case. However, the Court said, “nothing in Gladden limits the exercise of the highest degree of care solely to the trimming of branches that are either touching or close to wires. Rather, the focus in Gladden is on the likelihood of injury and prevention thereof.”

The key issue here, the Court said, was whether the hazard tree created an unreasonable risk of injury, and that was a question of fact. If it did, then Greg’s self-help in the Union Electric easement should be paid by the utility.

The trial court was in error when it effectively determined a question of fact question on a motion to dismiss. Greg’s pleadings were adequate to state a cause of action, so the matter had to go back for trial.