You’ve seen the “adopt a highway” signs along local roads, where some company or organization undertakes to take care of a strip of the road. Governments have figured out that the adoption program was a sweet deal. The government gets free labor to maintain a public asset. A local group gets its name attached to a do-gooder project.

Some places have gone beyond the stretch-of-road adoption program in favor of entire enclaves. The City of Fort Worth, Texas, had such a program, one in which groups could adopt a whole park.

Last time we checked the geography, Fort Worth was pretty flat. That did not prevent the City from having a mountain bike park, or for that matter, a band of dedicated mountain bike riders ready to adopt it. What a perfect arrangement – synergy on knobby tires – at least until Norm DeLamar, a mountain biker, got clotheslined by a dead tree.

Adopted kids have parents who are obligated to take care of them. Norm figured that it worked for kids and parents, it must work for parks and adopt-a-park groups. Like most injured parties who know how to find the courthouse, Norm figured that because he was hurt, someone was obligated to pay him money. After all, this is America.

But the adoption turned out to be symbolic more than real. The mountain bike group was allowed to pick up litter, but the most it could do for dangers from hazard trees was to call the City Forester and cajole him or her to send a guy with a chainsaw. So the adopting parent really lacked any decision-making power when it came to park maintenance. But that hardly mattered to Norm and his lawyers.

DeLamar v. Fort Worth Mt. Biker’s Ass’n, 2019 Tex. App. LEXIS 466 (Ct.App. Texas Jan. 24, 2019). Norm was riding his mountain bike one summer day on a trail in Gateway, a park owned by the City of Fort Worth, when he came upon a downed tree blocking the trail at head level. Although Norm was reputed to be a “really good rider,” he apparently was not that good. Norm did not have time to stop or avoid the tree, and as a result, he was “clotheslined.” His head and neck stopped when they hit the tree; the rest of him did not. Norm was knocked from his bicycle and was injured.

Norm sued the City, claiming ordinary and gross negligence. The City answered that filed an answer and identified the Fort Worth Mountain Biker’s Association as a responsible third party because of an “Adopt-A-Park Agreement” between the City and the Association. Under the contract, the Ft. Worth Mountain Bikers were “responsible for constructing and maintaining the bike trail in question.” Norm added the Association as a defendant, arguing premises liability, claiming the Association owed “a duty to protect the general public from dangerous conditions such as falling trees.” Norm claimed the Association had breached this duty by failing to ensure the trees alongside of the bicycle trail were not a danger to cyclists, and consciously disregarding the heath of the trees and the danger that they pose.

The Adopt-A-Park Agreement provides the Association “shall perform all work and services hereunder as an independent contractor… [and] shall have exclusive control of, and the exclusive right to control the details of the work…” The Association is obligated to maintain the its sole cost and expense, and it defines “trail maintenance” as including but not being limited to, “pruning of trees; [and] removal of brush[.]”

The Contract prohibits the Association from “trimming and pruning, until written approval is obtained from the Director [of the Parks and Community Services Department],” and from “remov[ing] any tree without prior written permission from the City Forester.” Finally, the Contract expressly provides that the City “does not relinquish the right to control the management of the Parks, or the right to enforce all necessary and proper rules for the management and operation of the same.” 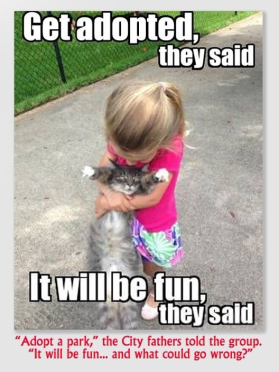 The Association answered that there was no evidence that it was negligent, as it owed neither Norman nor anyone else a duty with respect to the condition of the premises, or to keep the premises in reasonably safe condition, inspect the to discover any defects, or to repair any defect or give an adequate warning of any dangers.

Norm filed a response and attached a short affidavit and an expert report from an arborist, Matthew Clemons. In his response, Norman appeared to adopt the Association’s characterization of his claim as one for premises liability and in doing so focused on his status, arguing that he was an invitee. The Association filed a reply and objected to the expert report.

The trial court granted the Association’s motion, and threw out the suit.

To prevail on a premises-liability claim, Norm had to prove the Association had actual or constructive knowledge of some condition on the premises; that the condition posed an unreasonable risk of harm; that the owner did not exercise reasonable care to reduce or eliminate the risk; and that the owner’s failure to use such care proximately caused Norm’s injuries. For a general negligence claim, he had to prove the Association owed him a legal duty; that it breached the duty, and as a result of the breach, he was damaged.

Because the lines between negligent activity and premises liability are “sometimes unclear,” the Court said, determining whether a claim is one for a premises defect or general negligence “can be tricky.” Negligence encompasses a malfeasance theory based on affirmative, contemporaneous misconduct that causes an injury. Premises liability, on the other hand, encompasses a nonfeasance theory based on the owner’s failure to take measures to make the property safe.

But regardless of which horse Norm chose to ride, premises liability or general negligence, the sine qua non of his claim was the existence of a legal duty. It is a “multifaceted issue” requiring courts to balance a number of factors such as the risk and foreseeability of injury, the social utility of the actor’s conduct, the consequences of imposing the burden on the actor, and any other relevant competing individual and social interests implicated by the facts of the case.

Three categories of factors have emerged, the Court held. First, a court must consider the relationship between the parties. Then, a court examines the reasonable foreseeability of harm to the person injured. Finally, a court considers any public policy considerations.

Here, Norm argued the Association contractually assumed “responsibility for maintenance, construction and safety of the trails,” and as such, owed a duty to “protect the general public from dangerous conditions[.]” The record showed the Association members regularly worked on the trials, but had to identify problem trees to City employees who “were the only ones that [could] operate the chainsaws.”

Norm admitted he had ridden the same trail “no more [than] two days” earlier and that he had not seen the downed tree, so it was possible that the tree had fallen only a day or two before his crash. Indeed, he conceded that it was possible that the tree could have actually fallen only a few hours before his crash. What is more, the Agreement expressly prohibited the Association from pruning trees without the Director’s prior written approval and expressly prohibited the Association from removing any tree without prior written permission from the Forester. Norm cited nothing in the Agreement showing that the Association had agreed to assume a legal duty to maintain the safety of the trails for the general public.

The Court was not persuaded to create a legal duty regarding the downed tree and trail safety based on public policy considerations. Indeed, it said, public policy considerations weigh heavily against imposing such a legal duty on what is essentially a group of volunteer mountain bike enthusiasts who have been granted such limited oversight over the safety of the bike trails, if any.