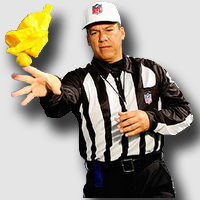 You’ve got to love October. High school football, college football, pro football… and the promise of the rivalry games of November, then Army-Navy, and the bowl games starting with the dull thrum of the New Mexico Bowl on December 15, and building up to the thundering crescendo of the Sugar, Fiesta and Rose Bowls on New Years Day! Is this a great country or what?

So, in honor of football, we’re looking at one of the Cardinal rules of trespass – illegal contact.

Usually illegal contact, that is, trespass to trees — where someone enters someone else’s land and cuts down trees without any right to do so — are pretty cut and dried. But not all trespasses are clear-cut (to turn a pun).

In today’s case from Louisiana, a party bought a piece of land from the tree owner’s sister, but conditioned the purchase on being able to get rid of some trees on the boundary line with the tree owner. The owner – no doubt a Patriot – signed a contract entitling the buyer to cut down trees on the boundary. The problem was that the contract was imprecise as to how many, or where exactly the trees were. The only thing that was clear was that the parties agreed that wild Broncos couldn’t pull him over to cut down the tree owner’s prize old live oak.

Too bad the owner didn’t watch the tree-cutting crew like a Seahawk. The buyer’s contractor was kind of a Buccaneer. He cut down 12 trees and, although he was told not to, he trimmed the live oak pretty aggressively. The owner cried “Deciduous foul!” and lawsuits flew like yellow hankies. Being unable to Bear the mess, the owner raced like a Jet to the courthouse, and slapped a Giant lawsuit on the buyer, Raven that he hadn’t given permission to do anything like that. He wanted treble damages for the wrongful cutting.

The court awarded about $5,000 in damage for the cut branches on the live oak, but it disagreed on the treble damages. The Court said that the ambiguous contract seemed to contemplate that the 12 trees would be cut down, and there was no basis for any recovery on those. As for the injured live oak, it was damaged but still standing. The statute awarded treble damages for cutting down trees, and the trimming — although a violation of the contract — wasn’t something for which treble damages could be awarded.

The plaintiff felt deflated over the whole episode. 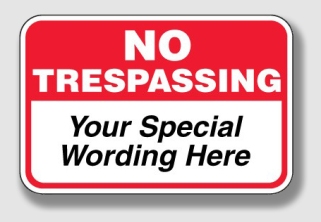 This means you, Berrytown!  Trespassing – kind of like the real property version of off sides.

Distefano filed a timber trespass action against Berrytown and Richardson, saying the defendants cut and removed five trees from his property and cut branches off the live oak tree without his permission. Distefano tried to recover damages under Louisiana Revised Statute 3:4278.1, commonly referred to as the “timber trespass” statute, that imposes a penalty of three times the fair market value of trees on people who unlawfully cut, fell, destroy, remove, or divert trees from a landowner’s property. Distefano also claimed restoration damages and damages due to the decrease in the value of his land, and further urged that defendants’ cutting activities caused him to suffer non-pecuniary damages.

At the conclusion of a bench trial, the court found that the agreement between Distefano and Berrytown contemplated the cutting and removal of all trees on the Distefano property that had been actually cut down. The court found that the parties clearly understood that the live oak tree was not to be cut, and awarded Distefano $6,045.00 for the unlawful removal of branches from his live oak tree, accepting expert testimony setting the fair market value of the live oak tree at that amount. The court declined to award treble damages, finding the treble damage provision inapplicable because the tree itself had not been cut down and removed, and because there was insufficient evidence of the fair market value of the limbs removed from the tree.

Distefano appealed, challenging the court’s finding that he consented to the cutting down of five trees from his property and the denial of his treble damage claim. 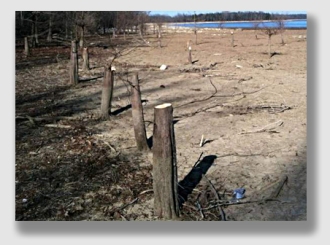 Distefano contended that the trial court should have ordered the defendants to pay treble damages. Louisiana Revised Statute 3:4278.1 imposes a penalty of three times the fair market value of the trees on those persons who unlawfully cut, fell, destroy, remove, or divert trees from a landowner’s property without the landowner’s consent. But, the Court said, no tree was cut down without permission. Instead, the oak tree was trimmed without permission, and the cut trees were taken pursuant to the agreement. Although contrary to the contract, the Court ruled, because the oak tree was not cut down, the statute did not authorize treble damages under the facts of this case.