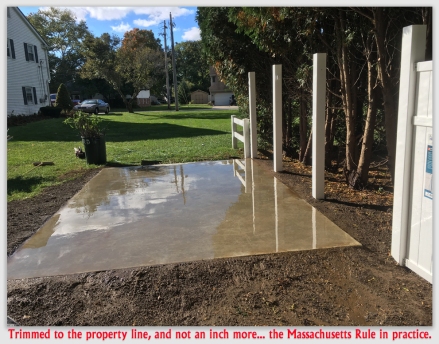 Having recently undertaken a construction project imagined and ramrodded by my wife of 39 years, I found myself trimming back some gargantuan arborvitae belonging to my neighbor, whom I will call “John” (because that’s his name). The arborvitae were just puny little bushes when planted by Andy and Allwyn, two neighboring homeowners ago, but in the 25 years since they were mere shrubs planted a foot or so on John’s side of the property line, they have grown into tower, misshapen monsters. On my side of the property line, they have swollen well into my airspace.

My airspace? Sounds a bit pretentious, doesn’t it? But that’s what we’re really talking about when we discuss overhanging branches and limbs. We all know about adverse possession – in which a sufficiently brazen squatter can gain title to your property if he or she waits you out – and even prescriptive easements, where the same trespasser gain acquire rights to use your property.

What if my neighbor had stalked out his back door last weekend and claimed his branches had been overhanging my property (and messing up the roof of my shed) for more than 21 years, giving him a prescriptive easement to my airspace? So while it’s still my air, he gets to use it. And breathe it. And there is nothing I can do about it? Whither the Massachusetts Rule?

A prescriptive easement over your neighbor’s airspace is a novel argument, indeed. Fortunately for me, if my neighbor stalks out of his backdoor, he is much more likely to confront me with a basket of zucchini or a big butternut squash than he is with a wacky airspace easement argument. He is a pretty fine neighbor.

But not everyone is blessed with a neighbor as congenial as is mine. That’s lucky for me in a sense, because – as the Kansas Court of Appeals observed today – when neighbors cannot get along, the courts protect property rights. And when courts do that, I have something to write about. Neighbor disputes that end up in court happen frequently enough to keep me going five days a week. And there are plenty of cases I never get to.

So is that clever lawyering, or just a lot of hot air? Let’s see whether the Court abrogated the ad coelum doctrine or instead brought the defendant back down to earth.

Pierce v. Casady, 11 Kan.App.2d 23, 711 P.2d 766 (Kansas Ct.App. 1985). Jim Pierce and Paul Casady are adjoining landowners with a 75-year old pecan tree between them. The pecan trunk and root flare is on Paul’s land, but only a foot from the property line, and the tree leans toward Jim’s place. In fact, according to Jim, about three-quarters of the tree overhangs Pierce land, rather ominously, given the substantial split in the tree’s fork (which also overhangs Jim’s property).

The length of the split on one limb is four feet and on the other about two feet. If the tree fell due to the split, it would fall on Jim’s house, garage, and any cars in the driveway. Trimming the tree at the property line is not practical – unless one does not mind killing the tree in the process – because of the tree’s location and the angle at which it leans.

Jim sued for a declaratory judgment that he had the right to cut the overhanging branches back to their property line or, in the alternative, to declare the tree a nuisance to be abated by removal. The trial court ruled that Paul had not acquired a prescriptive right to the airspace the tree occupies, and that the tree constitutes a nuisance and is a danger to Jim, causing his to fear for his safety. Paul was ordered to abate the nuisance by removing the tree either at its base or at the point where it crosses plaintiffs’ property line.

The court of appeals rejected Paul’s argument that he had acquired an easement through Jim’s airspace, because such cannot be gotten by prescription, that is, by simply occupying the airspace without permission for a long enough period of time.

Jim argued that the tree could not be a nuisance. That did not affect Paul’s right to trim branches that were overhanging his property even though the trunk of the tree was on Paul’s land. The landowner may not, the Court said, go on the neighbor’s land and remove the tree or any part thereof absent his neighbor’s permission.

If the tree is a nuisance, the landowner may compel the neighbor to abate the nuisance or, if an injury occurs, look to the neighbor to pay any damages allowable by law. In this case, the Court observed, it appeared that if the tree is trimmed at the property line it would be killed. The trial court recognized this, and gave Paul the option to trim to the proprety line or simply remove the whole tree. 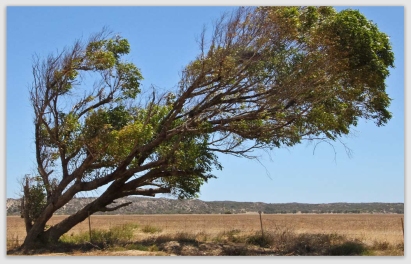 Here, the Court said, the tree was a danger to Jim, reasonably causing him to fear for his safety. The evidence supported the reasonableness of his apprehension: the split in the fork of the tree located above his property, the squeaking sound when the wind blows, the angle at which the tree leans toward Jim’s property, and the testimony of the experts.

The Court admitted that “the result reached here will be distasteful to all who treasure trees. The philosophy of the law is simply that whenever neighbors cannot agree, the law will protect each property owner’s rights insofar as that is possible. Any other result would cause landowners to seek self-help or to litigate each time a piece of vegetation starts to overhang their property for fear of losing the use or partial use of their property as the vegetation grows.”