LET’S GET THIS STRAIGHT – JOYCE KILMER WAS NOT A GIRL

Today’s case reminded us of the tension between those of us who love trees for all of the intangibles they deliver – shade in the summer, shelter from the rain, a windbreak, a place on which to mount our birdhouses and hammocks and tires on a rope for the kids…

What all of these have in common is that none of them is accounted for when a tree is cut down, stripped of branches and run through the sawmill. The stumpage value – the worth of the tree’s harvestable wood to the mill on the ground in the woods – doesn’t account for all of what we like about our ornamental trees.

That reminded us of Joyce Kilmer, who was among the first to calculate the noncommercial value of ornamental trees (after a fashion), writing, “I think that I shall never see a poem as lovely as a tree…”

And that in turn reminded us to be proactive in telling everyone that Joyce Kilmer was not a girl. Not that there’s anything wrong with girls, or girl poets (we’re big Emily Dickinson fans ourselves), but we regularly come across knuckleheads who say “Joyce Kilmer wrote those words because she…”

Nope, nope, nope. Joyce was a boy, and later a young man, His poetry and writing career was cut short when he fell, killed in action, in France 100 years ago this month.

In the case we’re talking about today, it’s a cinch that Gordon Lamb – who is also a boy – didn’t read much Joyce Kilmer. He was probably more a William Blake fan, because he sure hit his logging assignment like a “tiger, tiger burning bright…” He cut all of the trees he was supposed to, and then, for good measure, cut or destroyed about 400 extra.

The trial court held that the homeowners whose trees fell victim to the tigrine Mr. Lamb were limited to stumpage value. It was a sweet outcome for the defendant: 400 trees ended up costing Gordon about $7,000, well less than $20.00 per tree destroyed. But then the Cincinnati-based Court of Appeals stepped in, applying what is by now universally recognized as the proper measure of damages: noncommercial trees are generally worth more than an equal number of commercial trees.

Denoyer v. Lamb, 490 N.E.2d 615 (Ohio App. 1, December 5, 1984). Murphy Development Company marketed subdivided lots from a wooded parcel it owned. It sold five parcels, of which four had homes built on them. The parcels were cleared except for a mature woodland behind them (which Murphy still owned), which growth extended onto the rear of the five lots.

Murphy Development hired Gordon Lamb to harvest mature timber from the woods the development company still owned. Gordon Lamb set off like a tiger, cutting not only trees from the Murphy acreage, but sawing into the woodlands on the five private lots. When the sawdust settled, Gordon’s crew had cut 68 trees that did not belong to the Murphy company, and destroyed 331 more.

The afflicted property owners whose trees were decimated, including the Denoyer family, sued. 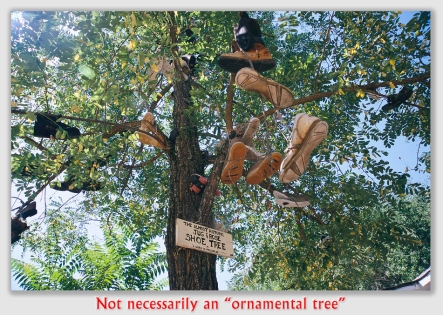 Held: The trial court judgment was reversed, and the Denoyers were permitted to claim restoration damages

The Court of Appeals laid the framework for assessing when replacement damages should be awarded. “In an action for compensatory damages for cutting, destroying and damaging trees and other growth, and for related damage to the land,” the Court wrote, “when the owner intends to use the property for a residence or for recreation or both, according to his personal tastes and wishes, the owner is not limited to diminution in value (difference in value of the whole property before and after the damage) or to the stumpage or other commercial value of the timber.”

Instead, the Court ruled, an owner may recover as damages the costs of reasonable restoration of the property to its preexisting condition or (because regaining the preexisting condition of often not possible) to a condition as close as reasonably feasible. “Reasonably feasible” means that the courts should not order grossly disproportionate expenditures, and allow for natural regeneration within a reasonable period of time.

Where cut trees have been used for a specific purpose – such as a sound barrier and screen from highway traffic, or shade, or even mere ornamentation – restoration cost is the proper measure of damages. Additionally, the cost of restoration should be used as the measure of damages where “the owner’s personal use is neither specific nor measurable by commercial standards, and when the trees form a part of an ecological system of personal value to the owner.”

The Court reasoned that in the present case, stumpage value could be determined in several ways, but all of those methods would yield a much smaller amount than the cost of replacement. To limit the Denoyers’ and their fellow lot owners’ recovery to stumpage value would be to enforce a timber harvest the plaintiffs never contracted for, or even wanted. It would fail to account for their intended use or real loss.

The Court of Appeals thus held that the trial court erred in excluding evidence of reasonable restoration costs, including cleanup, repair and regrading.